Louisiana Tech is No. 1 in nation among public universities for lowest average student debt

— U.S. News & World Report 2016 Best Colleges list says graduates from Louisiana Tech leave with less average student debt than those of any other public institution in United States. —
Students that graduate from Louisiana Tech University do so with the lowest average amount of student loan debt of any public university in the United States, according to U.S. News and World Report’s 2016 Best Colleges list and its classification and ranking of National Universities. 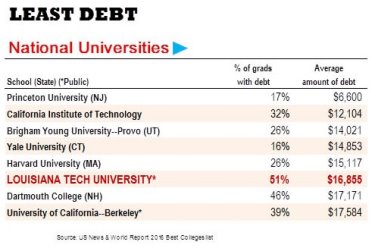 Louisiana Tech is the first public institution to appear on the list of National Universities with the least average amount of student debt at graduation and is sixth in the nation overall, joining the likes of Princeton University, California Institute of Technology, Brigham Young University, Yale University, Harvard University, Dartmouth College and the University of California-Berkley, in the top eight.
“Louisiana Tech’s position on this list with institutions such as Princeton, Harvard, Yale and Caltech is something our entire university community is extremely proud of and is a testament to our commitment to offering students educational excellence and value,” says Louisiana Tech President Les Guice. “When you combine this least average debt and our Tier One rankings from U.S. News & World Report along with other national recognition for highest return on investment and highest mid-career salaries for graduates, we are providing opportunities and value that only a handful of universities in the nation can match.”
Along with the least average debt ranking, Louisiana Tech University earned its fifth consecutive Tier One National Universities ranking in the 2016 U.S. News & World Report’s 2016 Best Colleges list. Louisiana Tech, along with Tulane University and Louisiana State University, were the only institutions in the state to achieve a Tier One National Universities designation. Louisiana Tech improved its ranking over last year, moving up from 201 to 199 on the 2016 list.
Louisiana Tech also earned a spot among the nation’s Top 120 Public Universities as well as earning a spot in the Top 125 of the national rankings for its undergraduate engineering programs. The undergraduate business programs at Louisiana Tech were also nationally ranked.
“The Tier One National University ranking is something we are also very proud of and is evidence of the commitment shown by our faculty and staff to serving our students and strengthening our institution,” Guice said. “I thank the faculty and staff across the campus for their dedication and support in providing our students with unparalleled learning opportunities and educational experiences.”
The U.S. News and World Report rankings are based on several key measures of quality, including assessment of excellence as defined by feedback from academic peers and high school guidance counselors, graduation and retention rates, faculty resources, student selectivity, financial resources, graduation rate performance which is defined by the difference between actual and predicted graduation rates, and alumni giving. Scores for each measure are weighted to determine a final overall score.
U.S. News & World Report assessed nearly 1,600 four-year colleges and universities across the country and has classified a total of 280 institutions as “National Universities,” 173 of which are public. Based on categories developed by the Carnegie Foundation for the Advancement of Teaching, “National Universities” include institutions that offer a full range of undergraduate majors, plus master’s and Ph.D. programs, and emphasize faculty research. The Carnegie classification has served as the basis for the Best Colleges ranking category system since the first rankings were done in 1983.
In addition to its U.S. News & World Report rankings, Louisiana Tech was recently ranked No. 1 in the State of Louisiana for highest average mid-career earnings for graduates, according to PayScale.com’s 2015-2016 College Salary Report. Tech was also ranked among the top universities in the nation in Forbes’ list of America’s Top Colleges 2015, and in the top 2.6 percent of the world’s degree-granting institutions by the Center for World University Rankings.