For the third consecutive year, Louisiana Tech University has been named a Military Friendly School by Victory Media Inc., the premier media entity for military personnel transitioning to civilian life. 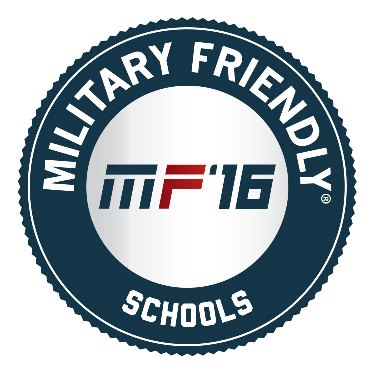 The 2016 Military Friendly Schools list highlights more than 1,400 institutions around the United States that exhibit best practices in support of military students and employees, respectively. Higher education institutions compete for the designation by completing an extensive survey covering ten indicators of success that included support for student veterans on campus, graduation and employment outcomes, and military spouse policies.
“We’re honored to have earned this distinction again,” said Monte Parker, director of Louisiana Tech’s Barksdale Program and a 30-year U.S. Air Force veteran. “It is a real pleasure to serve our veterans and military members. Our faculty and staff take great pride in easing their transition into the classroom and assisting with the educational process through to graduation.”
Louisiana Tech has offered on-base degree programs at Barksdale Air Force Base since September 1965. Working in conjunction with the Department of the Air Force, Louisiana Tech provides post-secondary education programs designed to meet the needs of Air Force and other military personnel. While enrollment priority is given to military members, programs and services are also offered to retirees, civil service workers, dependents, and off-base civilians.
In addition to recognizing the selected institutions, the Military Friendly Schools list for 2016 features interactive tools and search functionality to help military students find the best school to suit their unique needs and preferences.
According to its website, Victory Media says that nearly 400,000 active duty, National Guard and Armed Forces Reserve service members will transition their skills to campuses and companies nationwide this year.
Victory Media is a veteran-owned business founded in 2001 that has led the industry as a ratings entity for over a decade, surveying tens of thousands of institutions and adjudicating lists that capture best practices in recruitment and retention of military personnel as civilian employees, students and franchisees. The Military Friendly School list is published annually in G.I. Jobs magazine.
“We live in an era when the value of military service in the professional world is unquestioned and unmatched,” said Chris Hale, a Navy veteran and chairman and co-founder of Victory Media. “Veterans are graduates of the premier training institution in the world, but they need a consistent and predictable standard that lets them make good choices for major life decisions like where to work or where to enroll in school.
“The mission of Military Friendly is to create maximum professional opportunity for them and other members of the military community.”
To learn more about Louisiana Tech-Barksdale and its programs for military members and veterans, visit http://www.latech.edu/globalcampus/military.php.