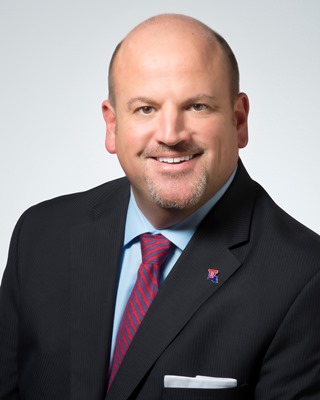 Hull, who will lead Louisiana Tech’s fundraising, development and alumni relations activities, was selected from a pool of outstanding candidates following an extensive national search. He will replace Corre Stegall, who retired in July after a distinguished 25-year career at Louisiana Tech as an English professor, alumni and development director, and vice president.
“I consider myself very privileged to assume this leadership position, particularly given the stature Louisiana Tech University enjoys in American higher education,” said Hull. “I am grateful and excited about working with the supportive and dedicated alumni, parents, and friends of the university who make the important work of the students, faculty, and staff so highly successful.”
As vice president of Institutional Advancement at Austin College, Hull led a staff of nearly two dozen, responsible for institutional fundraising, alumni relations, marketing and communications. He developed and implemented a comprehensive development program, resulting in 129 percent increase in outright gifts since 2011. During his tenure, the college also experienced an increase to estate gifts by 61 percent and participation by 14 percent.
Prior to his role at Austin College, Hull served in various development roles at the University of Oklahoma including Director of Development for the Colleges of Architecture and Education (1999-2003), Director of Development for the College of Engineering (2003-2007), and Executive Director of Development for the College of Engineering (2007-2010). He provided leadership during a $100 million capital campaign in the College of Engineering, resulting in over $139 million raised in five years. Hull also lead development programs for two colleges during an institutional-wide $200 million “Reach for Excellence” campaign that resulted in over $500 million.
“Brooks is a great addition to my leadership team and brings tremendous experience and passion to our development program,” said Louisiana Tech President Les Guice. “He has already hit the ground running in establishing relationships with the Tech family and in developing aggressive plans for fundraising.”
Hull earned a bachelor’s degree in public affairs and administration (1996), and a master’s degree in human relations (2001) from the University of Oklahoma, and is also a Certified Fund Raising Executive. Hull has served as a member and as chairman of the Board of Directors of the Sherman Economic Development Corporation, and a member of the Board of Directors for the Council for Advancement and Support of Education (CASE)-District IV.
Hull has served on teams that have been recognized by the Council for Advancement and Support of Education’s Circle of Excellence Awards Program with the CASE-Wealth ID Award for Fundraising-Overall Performance in 2002 and 2006.
Hull comes to Louisiana Tech and Ruston with his wife, Kerri, and their two sons, Hunter and Fisher. He says they are looking forward to this new chapter in their lives and to becoming a part of the Tech family.