“Words matter. You have to connect with people before you can communicate, persuade, understand, inform, influence and much more.”
That was the message presented to 267 new Louisiana Tech University graduates by keynote speaker Dr. Reginald Owens during the school’s 317th commencement ceremony held Thursday morning at the Thomas Assembly Center. 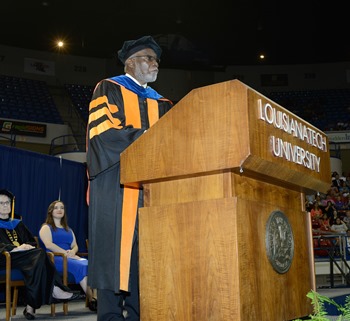 Owens, who retires at the end of the month, is the former department head for journalism and F. Jay Taylor Endowed Chair of Journalism at Louisiana Tech, is also is also the former director of Louisiana Tech’s News Bureau and member of the University Communications Department. He worked closely with and mentored students of The Tech Talk student newspaper, Lagniappe student yearbook and SPEAK Magazine, all of which were nationally award-winning student media.
“(Rawlings) said at his first news conference ‘Words matter, leadership matters at this time.’ Over the period of this tragic event consumed our attention, Mayor Rawlings shortened the phrase to ‘words matter,’” Owens said.
Yes, words do matter, Owen added.
“I have known that for a long time,” Owens said. “I have known, too, that we can’t solve anything if we are screaming at each other. How can you hear? How do you know what is being said? Are you listening? Yes, listening is the major factor in communication. The phrase ’words matter’ here, therefore, is a metaphor, actually, for the ultimate perception of communication meaning.”
Owens told the graduates that it is crucial that they build a proper bridge from interpersonal to mediated communication.
“This is essential in today’s intersection of words and technology,” Owens said. “In digital communication, words can be more powerful — and more ambiguous — because the receiver can’t hear the inflections in voice delivery and can’t see the body language of the sender delivering the message apparent face to face.
“I am talking about such platforms as email, Facebook, Integra, Pinterest, Snapchat and Twitter, among others.”
Owens told the gradate that in order to help prepare future Tech graduates about our new world of words, the university has put a new emphasis on teaching communication skills beginning with the fall 2016 freshman class.
“As the university’s new curriculum evolved over the past few years, I often heard the former vice president of advancement, Corre Stegall, tell the story about the recruiter moaning that too many graduates don’t have proper communication skills,” Owens said. “The recruiter noted that it was easier for his company to hire someone who could communicate and then teach them engineering, rather than the other way around. Employers consistently rank communication skills as one of the most important when hiring graduates.”
Before introducing Owens, Louisiana Tech President Les Guice told the graduates it was a day they’ll always remember.
“Many of those who started Louisiana Tech with you aren’t here today,” Guice said. “Despite the challenges you faced, it was you who set goals and worked tirelessly to achieve them. It was you who showed perseverance and dedicated countless hours to study, research and attending class.
“You have made many memories that will truly last a lifetime. Today is truly a milestone in your life’s journey.”
Jeffrey Scott Arney of Floydada, Texas, was the top graduate as he picked up a Bachelor of Science degree from Tech’s College of Engineering and Science, graduating summa cum laude with a perfect 4.0 grade point average.  Arney is also a military veteran.
There were 162 undergraduate, 110 graduate and 21 doctoral degrees conferred in all.
As Owens began his speech, he did so by offering his signature greeting he’s opened each class he has taught over the past 40 years.
“Greetings! Salutations! Exultations! As-salamu alaykum! Muli Bwanji! Muli shani! Dobre utra! Konnichiwa! Guten Morgen! Bonjour! Buenos dias! Habari gani!,” Owens said. “I started this greeting for two reasons: First, to get students’ attention. Secondly, a goal was to engender some empathy and understanding of their diverse culture and this multicultural world.
“In this class introduction, besides English, students were introduced to greetings in these languages: Arabic, Bantu and Bemba languages spoken in southern Africa, Russian, Japanese, German, French, Spanish and Swahili, the lingua franca language spoken throughout Africa. The point of this greeting as a teaching tool is this:  You have to connect with people before you can communicate, persuade, understand, inform, influence and the list can go on and on.”
And Owens closed his speech in much the same way.
“Let me part as I began: in English, Arabic, Bantu and Bemba, Russian, Japanese, German, French, Swahili and Spanish,” Owens said. “See you later. Commence your journey. Maa salama. Salani. Chisuma. Da sveedaneeya. Sayonara. Auf wiedersehen. Au revoir. Kwaheri. Adios.
“That’s the final word. Peace.”
Written by T. Scott Boatright – boat@latech.edu