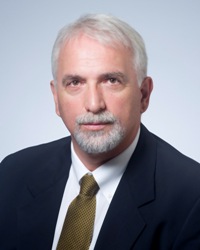 Through its Experimental Program to Stimulate Competitive Research (EPSCoR), NSF announced 11 awards totaling $55 million aimed at building research capacity to address fundamental questions about the brain and develop new innovations at the intersection of food, energy and water systems.  Iasemidis’ project titled, “Probing and Understanding the Brain: Micro and Macro Dynamics of Seizure and Memory Networks,” seeks transformative advances and understanding of the brain’s function, in particular the explanation of the foundations of transitions of brain networks from normal states into crises such as seizures.
“Epilepsy can serve as a unique window into the brain function because it causes impairment of functions depending on the location of the epileptogenic focus and the extent of the seizure networks in the brain,” said Iasemidis. “In this project, our team will conduct and analyze long-term, in-depth, electro-encephalographic (EEG) and electrochemical recordings, long-term in-depth optical imaging, and short-term magnetoencephalographic (MEG) recordings from the brains of animal and human subjects with epilepsy to uncover the causes of seizures, as well as their impact on higher brain functions such as memory.
“Completion of the scientific goals of the project would significantly advance the state-of-the-art in probing the brain at multiple levels at once and the mathematical study of spontaneous brain transitions to crises, as well as contribute to novel applications in epilepsy.”
Iasemidis is leading a team of investigators that includes Dr. Teresa Murray, Dr. Mark DeCoster, Dr. Prabhu Arumugam, Dr. Katie Evans and Dr. Ioannis Vlachos from Louisiana Tech; Dr. Jerzy Szaflarski, Dr. Sandipan Pati, Dr. Timothy Gawn and Dr. Roy Martin from the University of Alabama; and Dr. John Greenfield, Dr. Linda Larsen-Prior, Dr. Jennifer Gess and Dr. Jennifer Kleiner from the University of Arkansas.  The collaborative effort will investigate the origins and impacts of brain seizures – a disorder affecting approximately one percent of the global population.
Iasemidis, who also serves as director of Louisiana Tech’s Center for Biomedical Engineering and Rehabilitation Science (CBERS), is the founder and director of Louisiana Tech’s Brain Dynamics Lab, and is a Fellow of the American Institute of Medical and Biological Engineers (AIMBE) and the National Academy of Inventors (NAI), closely aligned his team’s proposal with NSF’s “Understanding the Brain” initiative, focusing on neuroscience and cognitive science, and which supports the BRAIN initiative announced by the White House in April 2013.
“Louisiana Tech is playing a key role in Understanding the Brain, a key Presidential Priority for President Barack Obama and for many federal agencies,” said Dr. Stan Napper, vice president for research and development at Louisiana Tech.  “Led by Dr. Iasemidis and joined by active researchers at Louisiana Tech, the University of Arkansas and the University of Alabama, this research will lead to new knowledge about how to detect and resolve epileptic seizures and memory deficits.”
As part of EPSCoR’s Research Infrastructure Improvement (RII) Track2 investment strategy, the four-year NSF awards announced Monday support 27 institutions in 18 jurisdictions and build national research strength by initiating collaborations across institutions in two or more EPSCoR jurisdictions.  The RII Track2 awards support research while also requiring award recipients to invest in developing a science, technology, engineering and mathematics (STEM) workforce particularly of early career faculty researchers.
“These awards represent a tremendous value for the scientific community, as they foster research into some of the most pressing issues facing U.S. society while simultaneously supporting collaborative research programs and workforce development,” said Denise Barnes, head of NSF EPSCoR. “Whether by expanding our knowledge of the brain, or by improving how our water, food and energy systems work efficiently together, these projects hold the promise of transforming our daily lives.”
Iasemidis is an internationally recognized expert in nonlinear dynamics and the detection, prediction and control of crises in complex coupled systems. He is also one of the founders of the field of seizure prediction, is a co-founder of two companies involved in neuromodulation and control of epilepsy, and is the co-author of 10 patents in this area.  Iasemidis has had over 5,000 scholarly citations and his research has been highlighted in multiple forums, including the New York Times, Discover magazine, the Teaching Company, and the American Society for the Advancement of Science.
For more information on Iasemidis’ project, visit https://www.nsf.gov/awardsearch/showAward?AWD_ID=1632891.