After nearly three years of loyal service and representing the pride and passion of Louisiana Tech University’s campus and alumni communities, Tech XXI is retiring from active service. 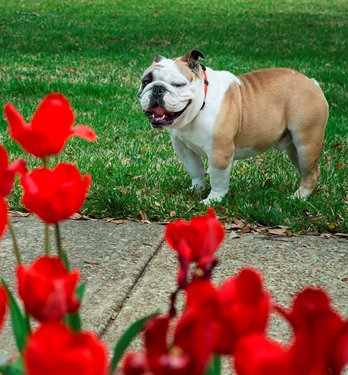 Louisiana Tech’s live English bulldog mascot is retiring from sideline duties and public appearances, effective October 1.  At the recommendation of veterinarians and guidance from the United States Department of Agriculture (USDA), Tech XXI’s retirement follows Louisiana Tech’s length-of-service protocol for the live bulldog mascot, developed prior to Tech XXI’s selection in 2013.
“Tech XXI represents the pride, passion and loyalty of the Louisiana Tech family,” said Mackenzie Potts, president of Louisiana Tech’s Student Government Association.  “He has been a beloved and iconic figure during his time as mascot, and has served our university well.  We will miss seeing him around campus and at sporting events, but his legacy will not be forgotten here.”
A gift to the university from the Louisiana Tech University Foundation in 2013, Tech XXI was selected to embody the strength, loyalty and traditions of Louisiana Tech.  In addition to his service as a live mascot, Tech XXI also provided Louisiana Tech’s pre-veterinary students, who often evaluated and cared for him, with unique and invaluable learning opportunities.
Ownership and care of Tech XXI will be transferred to a veterinary family located in central Louisiana, where he will live out his retirement as a family pet.  The decision to and process for replacing Tech XXI as a university mascot will be discussed by Louisiana Tech officials to ensure complete compliance with USDA regulations for service animals.
Although no replacement timetable has been announced, university administrators and student representatives say they will begin formal discussions by the end of the fall quarter.