Louisiana Tech University police officers are now wearing body cameras.
They’re the first law enforcement agency in the parish to use the palm-sized Axon cameras. Tech’s 16 officers began wearing them Thursday.
“It’s been great,” Sgt. Mickey Anglin said about his first day with a camera. “Most of the time you don’t even think about it being there.” 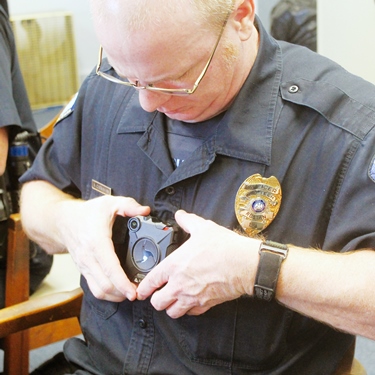 The cameras, worn on the breast pocket or at the center of the chest, have a 143-degree field, 20/20 vision and record 30 frames per second.
Anglin captured some of the department’s first body cam video. Within an hour after completing the camera training, he drove up on a vehicle accident at the intersection of Tech Drive and West Alabama Avenue.
Tech’s departmental policy requires officers to record all contacts with citizens made in the performance of official police duties, including accident investigation.
Only 15 percent of law enforcement agencies nationwide have on-officer camera systems, Brandon Davis, with Taser International, the company from which Tech bought the cameras, said.
“You guys are on the front end of this,” he told officers during their training session.
The cameras record only when officers activate them. The average officer records four hours of video during a 12-hour shift, Davis said.
Tech police Chief Randal Hermes said his department spent about a year researching and testing various styles of body cameras before deciding on the Axon model.
The 16 cameras and their accessories cost about $1,000 each.
“I believe the use of body camera’s will support, rather than undermine the positive police-community relations and aid in better serving the citizens of the Tech and community,” he said.
“Use of body cameras will make both the officer and the civilian accountable for their actions by providing objective evidence of encounters between civilians and police officers.”
The cameras would be useful in documenting crime scenes and other occurrences involving police-public interaction, as well as in providing information for officer evaluation and training, Hermes said.
Anglin, who first saw body cameras in action while working for a Dallas area police department, said the recordings also help officers remember incident details they might otherwise have overlooked or forgotten, especially in intense situations.
“I’m a firm believer in body-worn cameras,” he said.
University administrators see the cameras as a way to enhance safety for staff, faculty and students as well as campus visitors, Dickie Crawford, Tech’s Dean of Student Life/Auxiliay Services, said.
“With everything that’s going on in our society today, having out officers be able to have all the technology they need available to be successful, I think that’s our job,” he said.
Written by Nancy Bergeron – nancy@rustonleader.com.  Reprinted with permission from Ruston Daily Leader.