Fall graduates encouraged to ‘enjoy the journey and attack life’

Life is about changes, and learning to roll with them is the most important lesson of all.
That was the message presented by William E. Bradley, senior vice president for cyber engineering and technology services at CenturyLink, to 268 new graduates Saturday morning at Louisiana Tech University’s 318th Commencement Exercise at the Thomas Assembly Center. 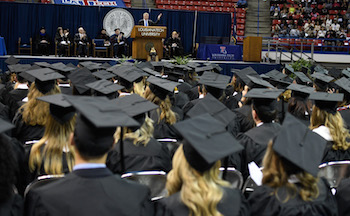 The group of new graduates included 195 undergraduate degree recipients and 73 graduate degree honorees, including 12 who earned doctoral degrees. Louisiana Tech also honored longtime Ruston resident Benjamin Denny as the 73rd Tower Medallion Recipient and newest member of Louisiana Tech’s Hall of Distinguished Alumni. The award recognizes those exceptional individuals who have brought honor not only to themselves, but also to Louisiana Tech University.
Bradley, a 1985 graduate from Louisiana Tech with a degree in computer science, has worked for CenturyLink for more than 30 years in a number of roles ranging from software developer to chief technology officer to chief information officer. One of the new graduates he was speaking to Saturday was his daughter Rebecca, who graduated with a Bachelor of Science degree from Tech’s College of Business.
“It’s been 11,508 days to be exact — that’s a long time — since I sat in the very seat you sit in today,” Bradley told the new graduates. “And I want to share a few things I learned since sitting there 31 years ago. Graduation is one of the major milestones in your life…it means your life is changing. You’ll never be the same. As a software designer, I never dreamed about being an executive leader. I guess I should have paid more attention in those accounting classes.
“Through that time I learned many things. No. 1, change is constant. No. 2, how we embrace change makes all the difference. Some changes are fun, but some are challenging — changes like finding a job and setting out on your own. Or perhaps changing careers later in life. You have to own that change. You must determine now how you will react. You must embrace change if you want to be successful. I encourage you to take that one step further. And No. 3, you should create change. Be bold enough to express a new idea. Be persistent enough to see that idea through. Mentor someone younger than you, or help someone in a knowledgeable way with the skills your degree shows you have.” 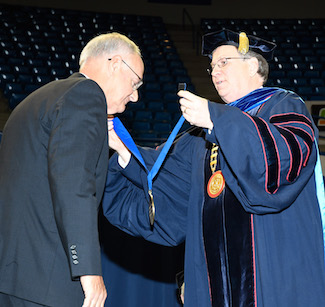 To be successful in the midst of challenges brought about by an ever-changing world, Bradley offered the new graduates three principles to live by and principles to succeed: follow your passion, work hard and give back.
Denny, the Tower Medallion recipient and newest member of the Hall of Distinguished Alumni, was recognized during fall commencement for his numerous achievements and tireless service to Louisiana Tech. Established in 1976 by the Louisiana Tech University Alumni Association, the Hall of Distinguished Alumni honors those alumni of the university who have distinguished themselves by exceptional achievement, community service and humanitarian activity.
Denny holds three degrees from Louisiana Tech, earning a Bachelor of Science degree in Business Data Processing in 1970, and a Master of Business Administration with a Finance Specialty in 1980. He also received an Honorary Doctor of Humanities degree in 2012.
A former director of Louisiana Tech’s Alumni Association, Denny received the Distinguished Alumnus Award from the College of Business in 1985, the Robert E. Russ Awards for Community Service from the Ruston-Lincoln Chamber of Commerce in 2010 and the Ruston Civic Leadership Award from the city of Ruston in 2013. He retired as President of Bank of Ruston in 2013 and continues to serve as Director for Bank of Ruston and Century Next Financial Corp.
At the close of his remarks, Bradley noted one last change the new graduates should remember.
“Today you are an educator, or an engineer, a scientist, nurse or accountant,” Bradley said. “Today you are an alumnus of Louisiana Tech University. But tomorrow is a new day, and I hope you take the same sense of accomplishment that you rightly feel today with you tomorrow. And that you enjoy your journey and attack life the same way you attacked your degree. Your future is bright — it belongs to you.”
Written by T. Scott Boatright – boat@latech.edu