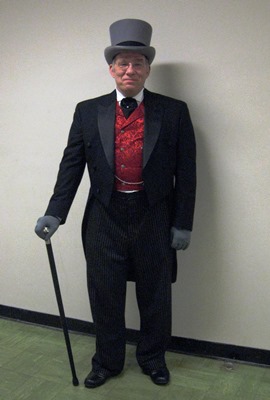 Dressed in full Victorian regalia, Merchant will provide an introduction to the piece and then read the abbreviated version that Dickens himself typically used for his public readings.  Also in Victorian dress, Jinko Kanno, an associate professor of mathematics and Merchant’s wife, will assist him with the event.
This popular work is one that Merchant likes to teach every winter quarter in his English 102 composition course because, as he describes it, “the issues it addresses are still with us – lack of true spirituality for the holiday, especially not enough caring for the poor, the needy, the sick — especially for children — and too much focus on material things, on greed.”
Dec. 17 is the 173rd anniversary of the publication of “A Christmas Carol,” which became an immediate hit and remains a popular tale even now.  It has been adapted to stage and film many times.
Because of its popularity, Dickens created a shortened version that he would read aloud and made many public reading tours in Europe as well as in America until his death. One of his purposes for the tours was to use the popularity of his story to help put a spotlight on the plight of the poor and to spread his message that we all are in a social contract, an unbreakable bond, that we are all our brothers’ keepers.
Dickens’ first public readings began in 1853 with two readings of A Christmas Carol before a crowd of 2,000 working-class people in Birmingham.
The event is free and open to the public.
Written by Judith Roberts – jroberts@latech.edu