Ronny Walker, mayor of the City of Ruston, will serve as the keynote speaker for Louisiana Tech University’s winter commencement exercises at 10:00 a.m. February 25 at the Thomas Assembly Center.
Walker has been deeply involved in the economic growth and civic well-being of Ruston and Lincoln Parish, both prior to and during his term as mayor, and has long been an advocate of and supporter for Louisiana Tech.  After graduation from Flora High School, Walker earned his bachelor’s degree in education from Mississippi State University and his master’s degree from the Southwestern Baptist Theological Seminary. After graduation, Walker served at Temple Baptist Church in Ruston from 1981 to 1989. 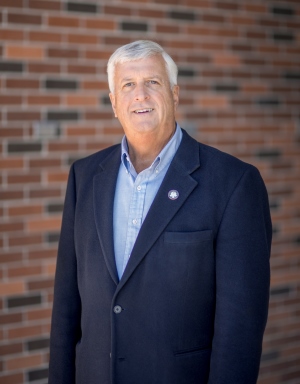 It was around this time that Walker’s interest in business and the economic future of our community began to grow. For more than two decades, Walker has devoted himself to building a better future for Lincoln Parish, Louisiana Tech, and the City of Ruston. He has held positions at the Ruston State Bank, Community Trust Bank, Louisiana Tech, and First National Bank in Ruston.
Walker has applied his skills, knowledge and energy to assisting the community and its people. He has served as president on the boards of the Ruston-Lincoln Chamber of Commerce, Lady Techsters Tip-Off Club, Louisiana Tech Quarterback Club, Lincoln Parish GIS Commission, Louisiana Peach Festival and ARCO.  Walker has also served on the Lincoln Parish Police Jury, Lincoln Parish Library, H.E.L.P. Agency, Ruston-Lincoln Industrial Development Committee, and the Louisiana Tech Alumni Board.
In November 2014, Ruston voters put their trust in the leadership strengths of Walker by electing him as their mayor.  One of the first calls he made after taking office in January 2015 was to Louisiana Tech President Les Guice, to discuss how to partner with the university to further benefit the community and people of Ruston.  The City of Ruston and Louisiana Tech have continued to work together to provide Ruston and Lincoln Parish with new opportunities for business, education and community growth.
Following Walker’s commencement address, the graduates from each of Louisiana Tech’s five academic colleges and the Graduate School will receive diplomas as well as their Tenet Medallions inscribed with the 12 Tenets of Tech and their year of graduation. The Tenets of Tech are guiding principles and personal characteristics that students and graduates are expected to embrace and uphold during and after their time at Louisiana Tech.
Winter commencement officially marks the end of the winter quarter at Louisiana Tech.  Spring quarter classes are scheduled to begin on March 8.