Louisiana Tech University’s Department of Theatre is set to raise the curtain on its fourth and final production of the 2016-2017 season with “Rumors,” written by Neil Simon and directed by Paul B. Crook, professor of theatre at Louisiana Tech. 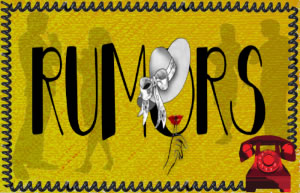 Simon’s famous farce will run at 7:30 p.m. nightly May 2-6, and at 2:00 p.m. May 7 in Stone Theatre, located in Louisiana Tech’s Howard Center for the Performing Arts.  Guests won’t want to miss a chance to see this door-slamming, fast paced comedy written by America’s greatest comedic playwright and where there is a secret behind every slamming door.  The production contains adult language and attendee discretion is advised.
Ticket for this classic production are $20 for general admission, $10 for students with ID, $15 for youth under 14 years old, and $15 for seniors 65 years old and up. For group rates, contact the box office, located in the lobby of Stone Theatre, at (318) 257-3942, Monday – Friday from 1:30 p.m. to 4:45 p.m.
Simon’s hilarious farce, Rumors, “has nothing on its mind except making the audience laugh,” according to Frank Rich’s review in the New York Times of the original Broadway production in 1988.
“(Rumors) has nothing on its mind except making the audience laugh,” said Frank Rich’s in his review of the original Broadway production in the New York Times in 1988.  The silliness of this story revolves around a dinner party at the home of the Deputy Mayor of New York, who is conspicuously absent from his own party. His lawyer, accountant, psychiatrist, their wives, and an assortment of other guests spend the evening trying to determine why he is absent and how that might affect each of their careers.
Filled with confusion and miscommunication, Rumors is a farcical masterpiece from America’s greatest comedic playwright.
For more information on “Rumors” or the Louisiana Tech Department of Theatre, please visit us at www.latechuniversitytheatre.com, “like” our Facebook page at www.facebook.com/latechtheatre, or follow us on Twitter and Instagram at @LaTechTheatre.
Written by Olivia Wilcox – stonetheatre@gmail.com