Louisiana Tech University and a record number of new graduates celebrated milestones Saturday as the school conducted its 320th Commencement Exercises before a standing room only crowd at the Thomas Assembly Center.
Louisiana Governor John Bel Edwards served as keynote speaker before Louisiana Tech conferred diplomas to a record 973 new graduates. The ceremonies also saw Tech break the 100,000 graduate mark, with Saturday’s total pushing the school’s overall total of graduates to 100,914 since the school was founded in 1894. 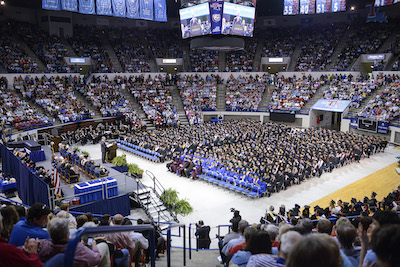 “Today is a very special day in the history of Louisiana Tech University,” said Louisiana Tech President Les Guice as he opened the commencement exercises. “In the spring of 1897, Harry Howard was awarded a Bachelor of Industry degree by the Industrial Institute and College of Louisiana, becoming the first graduate from what would later become known as Louisiana Tech University.
“One hundred and twenty years later, we sit together this morning in celebration of your achievements, and another milestone in the history of Louisiana Tech University. Today we recognize this class — your class — and our 100,000th graduate, and welcome a new generation to our alumni family.”
When Edwards took the podium, starting his speech by addressing the nearly 9,000 onlookers on hand to watch the ceremonies.
“I want to start by thanking all the parents, grandparents, aunts, uncles, cousins and friends who are here today in support of these students over the four, or five, or six, seven or whatever it might have taken them to graduate,” Edwards said.

Edwards then addressed the new graduates.
“You’ve all had many people support you along the way to help get you where you are today,” Edwards said. “So as you celebrate this milestone achievement today, please remember to thank them. And while you do so give thanks to God. As we were reminded in the invocation, all blessings come from God. We’re all quick to pray for help with things like that term paper you had to finish or a final test. You’re here — you made it. So now let’s give our thanks to God, too.”
Edwards reminded the new graduates that it was a time not only to celebrate, but to also reflect.
“I look out at this class and a see a true snapshot of what the future of Louisiana looks like,” Edwards said. “And our future looks really good. Graduation is a day to celebrate, to appreciate the hard work that got you to this point and for most, it will be a relief, no more slaving over term papers, no more racing to fight to get the best parking spots.
“But I’m also aware that this is already a time for reflection, and that graduations are bittersweet. It marks the end of what I hope has been one of the most fun and rewarding chapters in your life. One of the most special things about Tech is that a part of you will be here forever in the brick with your name on it that will lay in the alumni walkway.”
Edwards told the crowd he will continue to fight to improve conditions for higher education in Louisiana.
“North Louisiana and Tech are national assets, not just for his state but for the entire country,” Edwards said. “That’s the role that Tech is playing. And we need you here in Louisiana to keep the progress going. I want you to know that I believe in every one of you — Louisiana is better because of you. All of you are what makes Louisiana great.”
Edwards concluded that the new graduates are needed to help make Louisiana a better place.
“You’re ready for the real world because of what Louisiana Tech has given you,” Edwards said. “I encourage you to dream big, to work hard and never quit. Don’t take counsel from the professional malcontents and naysayers. … It takes passion and hard work to succeed and overcome life’s obstacles. Everyone here has already done that to some degree, each of you have overcome obstacles to be sitting here today.
“General Douglas McArthur said a true leader has the confidence to stand alone, the courage to make tough decisions and the compassion to listen to the needs of others. So in everything you do, find ways to do that — be confident, courageous and compassionate.”
Also honored during Louisiana Tech’s spring commencement exercises was President Emeritus Dan Reneau, who was presented with the coveted Tower Medallion and inducted as the 79th member of Louisiana Tech’s Hall of Distinguished Alumni. Established in 1976, the Hall of Distinguished Alumni honors those alumni of the university who have distinguished themselves by exceptional achievement, community service and humanitarian activity.
Reneau, who was Louisiana Tech’s longest serving president, personally awarded nearly 44,000 diplomas during his tenure and led the university’s achievement of the University of Louisiana System’s highest graduation, retention and fastest time-to-completion rates as well as the first of six consecutive Tier One National University ranking for Louisiana Tech from U.S. News & World Report.
In addition to their diplomas, the graduates from each of Louisiana Tech’s five academic colleges and the Graduate School received their Tenet Medallions inscribed with the 12 Tenets of Tech and their year of graduation. The Tenets of Tech are guiding principles and personal characteristics that students and graduates are expected to embrace and uphold during and after their time at Louisiana Tech.
Spring commencement officially marks the end of the spring quarter and the 2016-17 academic year at Louisiana Tech. Summer quarter classes begin on May 31.
Written by T. Scott Boatright – boat@latech.edu