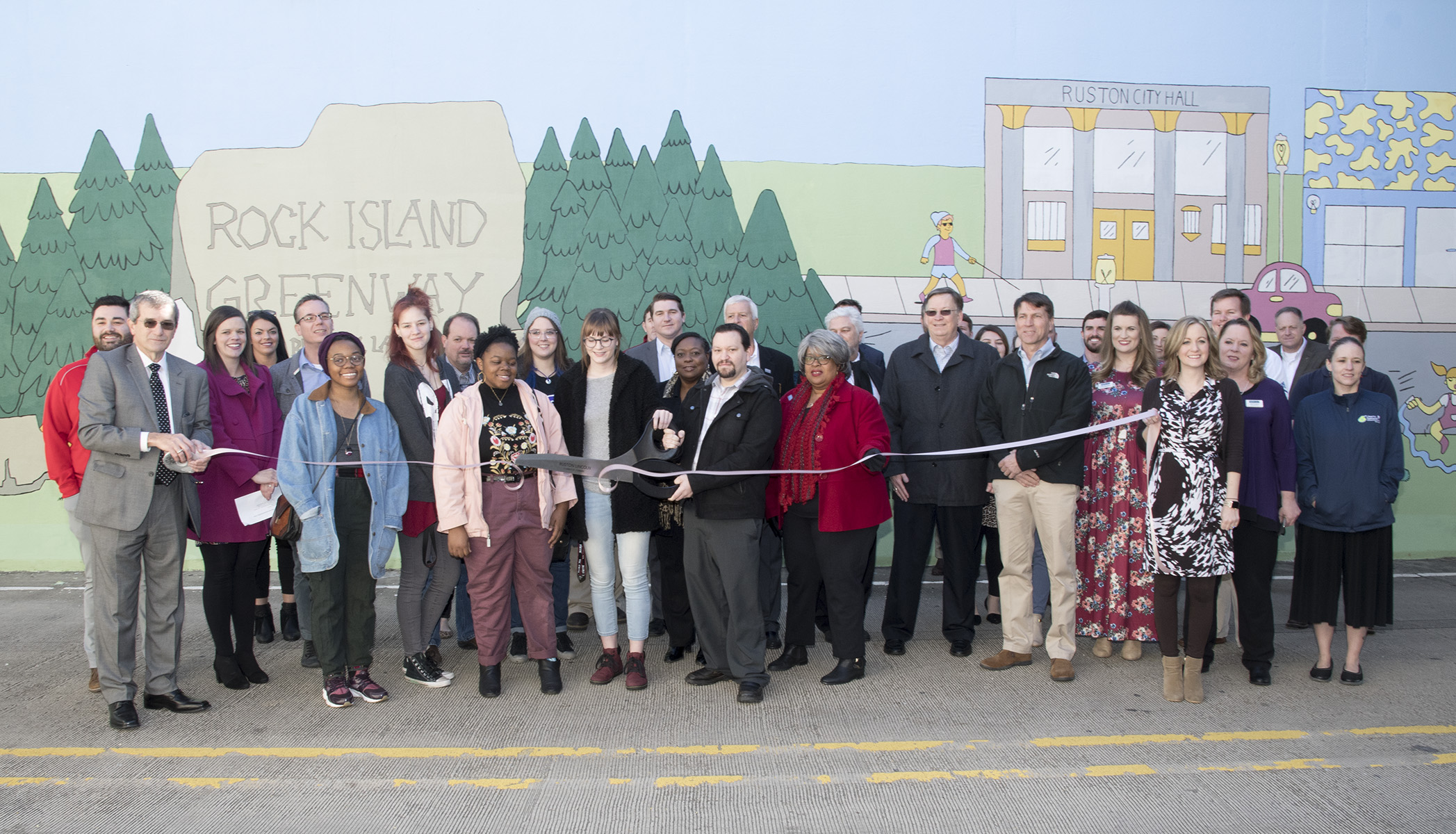 A celebration of art, partnership, progress, and momentum between the City of Ruston and Louisiana Tech now has a face that’s 200 feet long: The Rock Island Greenway Mural. 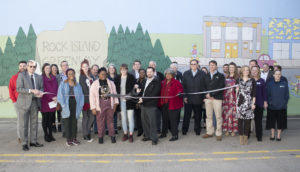 With Interstate 20 traffic overhead and a group of 70 business leaders, Ruston well-wishers, city council and chamber members, Tech students and faculty below, the ribbon was cut on a beautiful and chilly Tuesday morning to officially “open” the collaborative project that was more than a year in the making.
In the spring of 2016, the City and the Ruston Lincoln Parish Convention and Tourism Bureau approached Tech associate professor Nick Bustamante, chair of the School of Design, to discuss possibilities of a large-scale class mural project.
A pair of graphic design majors, David Reid and Larry Pleasant, completed the concept and final design of the project in Art 415 Directed Studies class in the Spring Quarter, 2017. Then in the Fall Quarter, 2017, Bustamante’s Art 321 Mural Painting class — 14 students — primed and painted the 200-feet long, 17-feet high wall.
The project took a combined 1,480 hours to complete. Some of those hours came from the 100 members of the community who turned out to help on Sept. 23 when the Art 321 students led a Community Paint Day.
Specifically, Rock Island Greenway is the under-construction centerpiece of Ruston’s six-mile bicycle/pedestrian network funded by voters’ approval in the April, 2016 Moving Ruston Forward initiative. Named after the railroad that once used this right-of-way and played a major role in Ruston’s founding, the greenway officially opened in June with completion of the first one-mile leg, a 12-feet wide path that runs south from the intersection of W. Kentucky and Chautauqua.
The greenway is the first of its kind in the region and “flows” in four parts, north to south, to represent the four parts of the community the greenway passes through: the piney hills, downtown, Louisiana Tech, and the south-side rural area.
Pre-work for the next mural project is on-going: on a wall of the Louisiana Center for the Blind, 101 S Trenton St. in downtown Ruston, “Ruston” will be painted above in large letters and below in braille.