A team from Louisiana Tech University helped the Q-weak experiment at the United States Department of Energy’s Thomas Jefferson National Accelerator Facility develop a new method to provide a precision test of the weak force, one of four fundamental forces in nature. This result, published recently in Nature, also constrains possibilities for new particles and forces beyond our present knowledge. 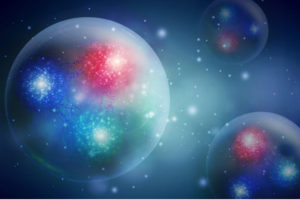 Dr. Steven Wells, program chair and associate professor of physics with the Louisiana Tech Center for Applied Physics Studies, Dr. Neven Simicevic, professor of physics and Dr. Rakitha Beminiwattha, assistant professor of physics, along with a team of Louisiana Tech undergraduate and graduate students, worked with researchers from across the nation to aid the Q-weak Collaboration in its search for physics beyond the Standard Model.
Wells says that the Q-weak experiment, aside from having a big impact on the scientific community by testing the Standard Model at a high level, has had a huge impact on Louisiana Tech University.
“Based on the Louisiana Tech Nuclear Physics Group’s involvement in this experiment,” Wells said. “We have secured well over a million dollars in federal funding. These funds have helped to finance Professor Emeritus Dr. Kathleen Johnston, Professor Neven Simicevic, and myself in our research efforts for nearly a decade. Much of the design of the equipment and ancillary physics measurements were, in fact, performed by Dr. Simicevic and myself, right here at Louisiana Tech.”
“Precision measurements like this one can act as windows into a world of potential new particles that otherwise might only be observable using extremely high-energy accelerators that are currently beyond the reach of our technical capabilities,”said Roger Carlini, a Jefferson Lab scientist and a co-spokesperson for the Q-weak Collaboration.
The Q-weak Collaboration has revealed one of the weak force’s secrets: the precise strength of its grip on the proton. While the weak force is difficult to observe directly, its influence can be felt in our everyday world. For example, it initiates the chain of reactions that power the sun and it provides a mechanism for radioactive decays that partially heat the Earth’s core and that also enable doctors to detect disease inside the body without surgery.
The proton’s weak charge is analogous to its more familiar electric charge, a measure of the influence the proton experiences from the electromagnetic force. These two interactions are closely related in the Standard Model, a highly successful theory that describes the electromagnetic and weak forces as two different aspects of a single force that interacts with subatomic particles.
To measure the proton’s weak charge, an intense beam of electrons was directed onto a target containing cold liquid hydrogen, and the electrons scattered from this target were detected in a precise, custom-built measuring apparatus. The key to the Q-weak experiment is that the electrons in the beam were highly polarized – prepared prior to acceleration to be mostly “spinning” in one direction, parallel or anti-parallel to the beam direction. With the direction of polarization rapidly reversed in a controlled manner, the experimenters were able to latch onto the weak interaction’s unique property of parity (akin to mirror symmetry) violation, in order to isolate its tiny effects to high precision: a different scattering rate by about 2 parts in 10 million was measured for the two beam polarization states.
The proton’s weak charge was found to be QWp=0.0719±0.0045, which turns out to be in excellent agreement with predictions of the Standard Model, which takes into account all known subatomic particles and the forces that act on them. Because the proton’s weak charge is so precisely predicted in this model, the new Q-weak result provides insight into predictions of hitherto unobserved heavy particles, such as those that may be produced by the Large Hadron Collider (LHC) at CERN in Europe or future high energy particle accelerators.
“After more than a decade of careful work, Q-weak not only informed the Standard Model, it showed that extreme precision can enable moderate-energy experiments to achieve results on par with the largest accelerators available to science,” said Anne Kinney, Assistant Director for the Mathematical and Physical Sciences Directorate at the National Science Foundation. “Such precision will be important in the hunt for physics beyond the Standard Model, where new particle effects would likely appear as extremely tiny deviations.”
The Q-weak Collaboration consists of about 100 scientists and more than 20 institutions. The experiment was funded by the U.S. Department of Energy Office of Science, the National Science Foundation, the Natural Sciences and Engineering Research Council of Canada, and the Canadian Foundation for Innovation, with matching and in-kind contributions from a number of the collaborating institutions.
“Beyond its research outcomes, Q-weak was a training ground for many early career scientists,” said Anne Kinney, Assistant Director for the Mathematical and Physical Sciences Directorate at the National Science Foundation, which helped fund the research. “Twenty-three people earned their PhDs working on this experiment, 17 supported by NSF grants to faculty at five different U.S. universities. Q-weak also provided excellent training opportunities to nearly 50 undergraduate students supported by NSF grants, including several who received NSF Research Experience for Undergraduates awards.”
The Louisiana Tech students involved in the project include six undergraduate and three graduate students, who have had hands-on experience developing hardware, software and simulations for the project as well as performing critical data analysis for the experiment.
“We anticipate increased recruitment of students interested in the Louisiana Tech Physics Program due to the national exposure this impressive experimental result will bring to the University,” Wells added.
The experiment has also provided Louisiana Tech with an additional faculty member, as Beminiwattha, the University’s newest addition to its Physics faculty, received his Ph.D. in Physics from Ohio University for his development and commissioning of the Q-weak experiment at Jefferson Lab.
Jefferson Lab is supported by the Office of Science of the U.S. Department of Energy. The Office of Science is the single largest supporter of basic research in the physical sciences in the United States, and is working to address some of the most pressing challenges of our time. For more information, please visit science.energy.gov