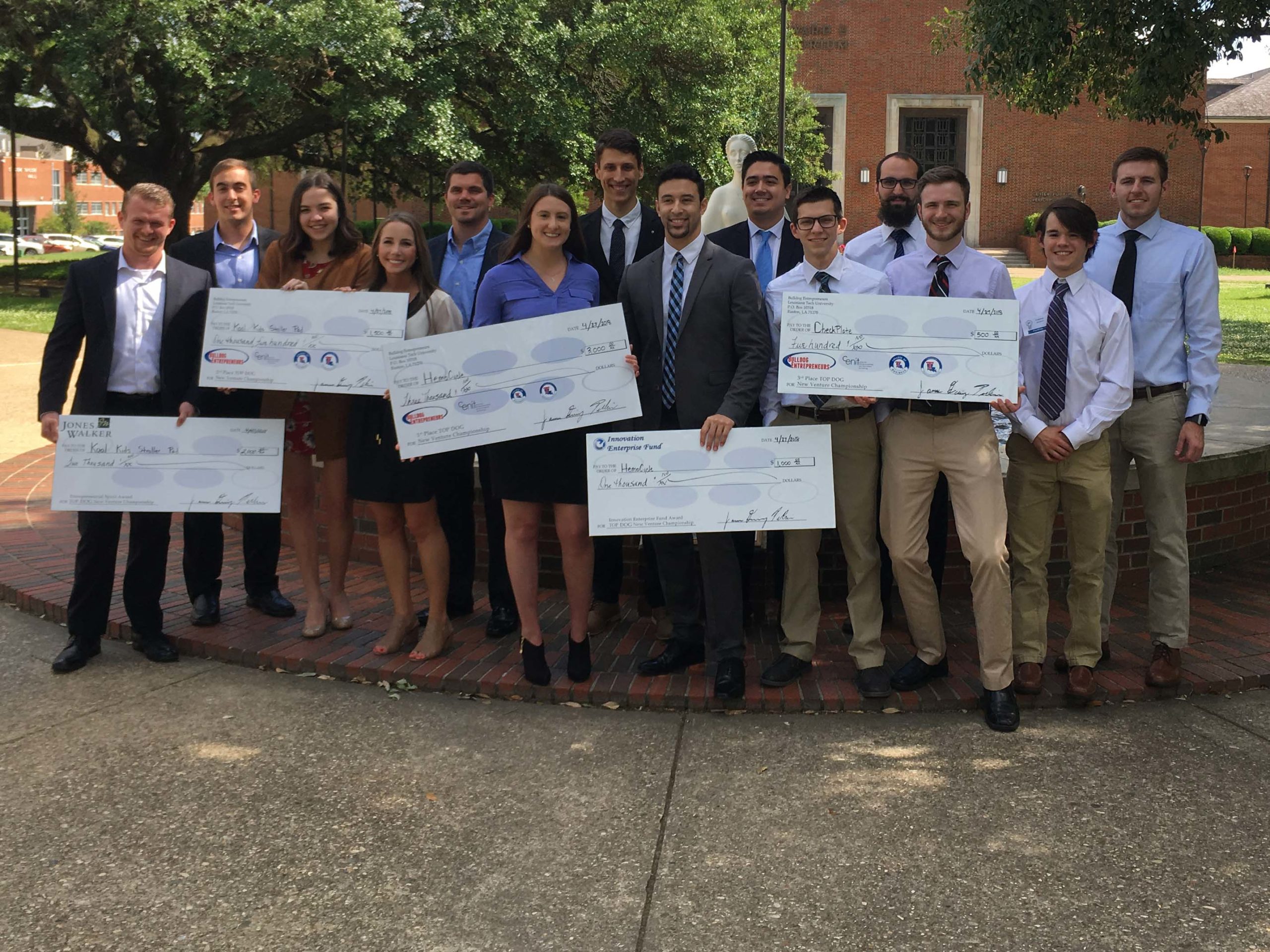 All it took for a team of five Louisiana Tech University seniors to earn first place in the University’s TOP DOG New Venture Championship was serious teamwork and planning, multi-disciplinary brainstorming, and lots and lots of phone calls and interviews.
“I couldn’t give you exact numbers,” said graduating senior and Grand Challenge Scholar Steven Pirvu, a member of the winning Team HemoCycle, “but in the fall alone, we talked to more than 150 people, from Shreveport to Ghana, Africa.” 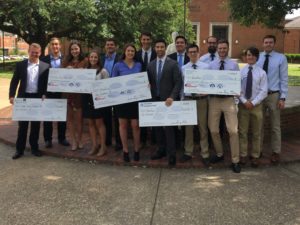 Team HemoCycle stops for a photo with the other winners of the Top Dog entrepreneurship competition.

Their work that began in October with the Top Dog Idea Pitch concluded recently with the championship over six other multi-disciplinary teams.
Their winning idea was HemoCycle, a more economical medical device that would bring blood recycling to hospitals in developing nations. Essentially, the machine would wash a patient’s blood during surgery and prepare it to be reintroduced into the patient, reducing the expense for blood bags.
For their effort, the team won $4,000 and gained a lot of valuable experience in problem solving and teamwork.
Here’s a snapshot of the winning team:
Ryan Botts: Industrial engineering major and son of an Air Force dad, he graduated from Pineville High in his parents’ hometown and will graduate from Tech in the fall. He’s working on developing a design company and hopes to stay in Ruston to help businesses and non-profits utilize the internet in more productive ways to better serve their clients. “I have a bunch of ideas for different businesses,” he said. “I won’t work now as an industrial engineering, but I’ll be able to use the degree to my advantage. I’m grounded in the ideas and terminology, so I’ll be better able to help the engineers I’ll work with; I understand the technology even though I’ll spend more time, at least now, in business.”
Joshua Jacobs: Mechanical engineering major from San Antonio who’ll graduate Saturday and who’s accepted a job with ZOLL Medical Corporation as a mechanical engineer. ZOLL is in the greater Boston area and makes one-third of the world’s defibrillators.
Colton Patterson: An entrepreneurship major with a minor in theater from New Orleans (Lusher Charter), he’ll graduate this summer and recently got an apprenticeship with an antique store back home. The son of a carpenter, he’ll repair antiques and explore options. His theatre education gave him lots of experience in prop and set building. “Anything like that would be an option,” he said. “I just know I love carpentry and need to do something with my hands professionally.”
Pirvu: Biomedical engineering major from Gonzales (St. Amant) who’ll graduate Saturday and move to Memphis to work as a clinical specialist with pacemakers and defibrillators for Medtronic, one of the largest medical device companies in the world. He’ll work with doctors and nurses and patients “from A to Z,” he said, from meeting with the patient and helping to decide what kind of device they need to being in the operating room during the procedure to following up with the patient and hospital staff six months later.
Caitlin Snell: Biomedical engineering major from Bossier City who’ll graduate Saturday and move to Atlanta, where she’s accepted a job as a support service engineer.
To arrive at HemoCycle, they began by listening.
“We spent a lot of extra time in the fall talking to as many people in the medical field as we could find, then let them rant on everything that goes wrong and all the problems they have with the medical system,” Botts said. “That have us a huge pile of data. Then we measured it up to our various skills and thought, ‘What CAN we do?’ We wanted it to have a humanitarian effect. We understood that developing nations have low access to alternatives to blood donations, so that’s how we zeroed in on recycling and moved in that direction.”
“Ryan and I worked hard to find the right markets for it,” Patterson said. “We ran a couple of focus groups, figured out how much it would cost and how we would go about setting up to make it. Especially at first, we called two or three hospitals a day just to see if such a thing was even manageable and whether or not the industry even wanted it. Turns out, people did.”
“Maybe we were a little surprised we won,” Pirvu said. “It was a complicated project; we weren’t sure we could translate it, but we did well enough so that people could understand it, and they liked it.
“There were a lot of good projects, but maybe we did a better job of explaining HemoCycle and the impact it could have,” he said. “We told a story and not so much sold a product.”
Because the winners are heading in different directions now, they won’t work on developing HemoCycle and use the six months of incubator space in Tech’s Robert H. Rawle Enterprise Center that comes with the victory.
“We’re putting it in our back pockets though,” Botts said. “We’ve found similar versions of the product, and there’s still the need. If one of us arrives in a position of being able to do this kind of work, we’ll re-visit the project and jumpstart it.”