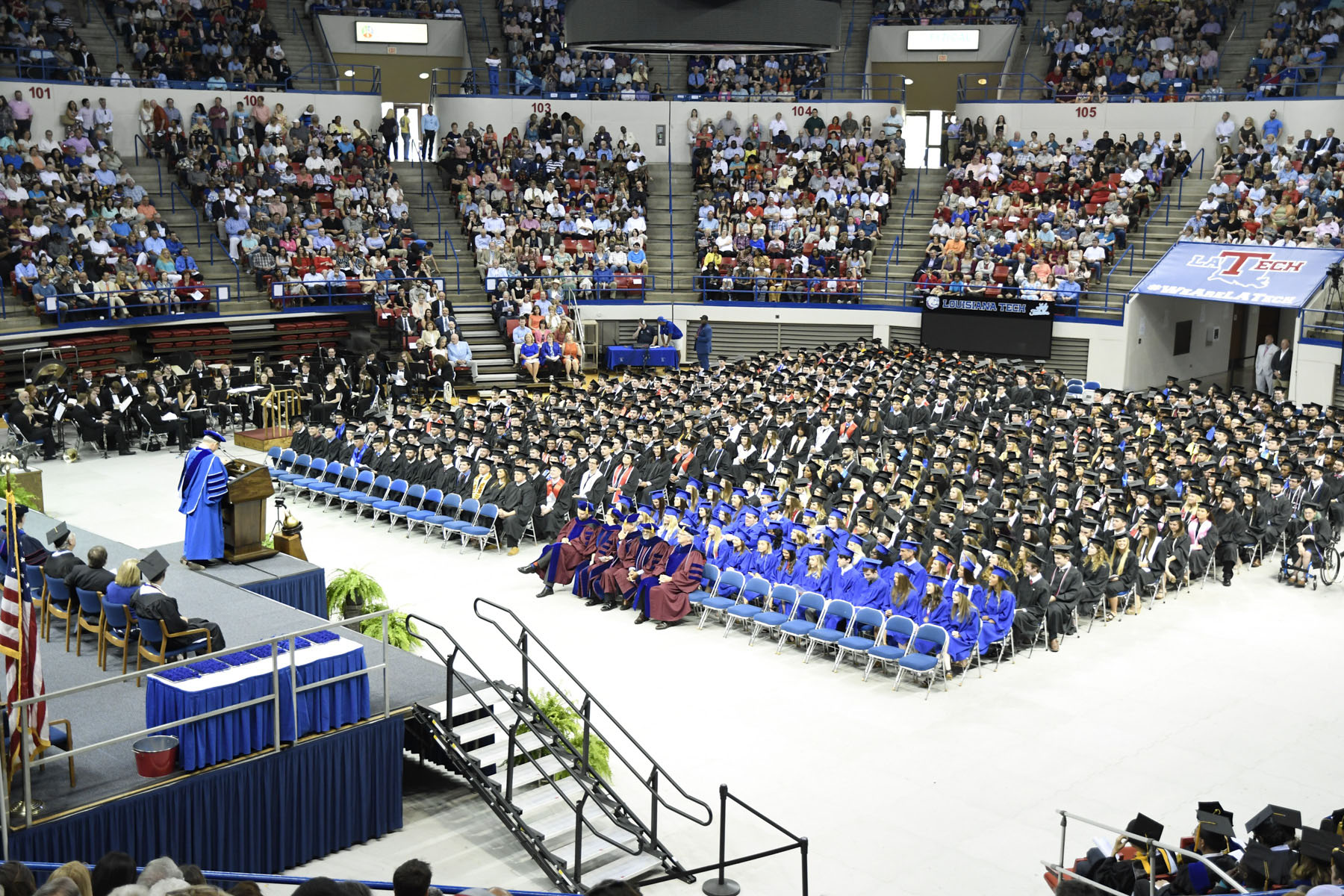 Louisiana Tech University graduated its largest class in University history during two commencement ceremonies Saturday. A total of 1061 graduates walked across the stage at the Thomas Assembly Center – 909 undergraduates received associate’s and bachelor’s degrees and 152 earned master’s and doctoral degrees. 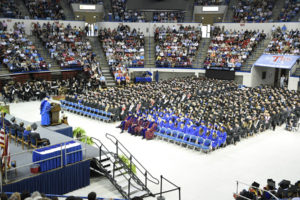 During his commencement address, Dr. Jim Henderson, president of the University of Louisiana System, advised graduates to remember that they leave Louisiana Tech prepared for any challenges because they have degrees from one of the finest institutions in the world.
“You will be doing work that generations before have never heard or dreamed of, but you’re prepared because you have a college degree and it’s from Louisiana Tech,” he said. “But don’t forget to keep learning.”
Henderson’s address focused on loyalty, but “not blind loyalty. You need to have loyalty with a belief and a focus on principles.”
Both of Henderson’s parents graduated from Louisiana Tech. His father, Clem, played football at Tech for two years before serving with the 2nd Marine Division in the Northern Mariana Islands during World War II. Legendary Coach Joe Aillet held his scholarship while he served and welcomed him back to play two more years after the war. Clem graduated in 1948. Henderson’s mother, Martha Vines, graduated from Tech in 1959 with her Bachelor of Arts degree and in 1968 with a Master of Education degree.
Henderson reminded graduates and their families about the loyalty of Aillet when he held scholarships for a group of students who were called to fight in WWII and called graduates to emulate that loyalty when remembering their alma mater.
“[Aillet] changed lives,” Henderson said. “He went from being an orphan from New York to being the head football coach at Louisiana Tech. We have felt the Aillet legacy through generations.”
During the morning ceremony, the University presented an honorary Doctor of Science degree to Craig Spohn, executive director of the Cyber Innovation Center in Bossier City.Spohn has championed north Louisiana’s development of a cyber economy for the past decade. Through Spohn’s relentless efforts, the CIC and its partners have secured millions of dollars for cyber programs and facilities, created a knowledge-based economy in the region, and attracted national attention from industry, government, and other communities.
“Craig has inspired and connected government, educational, and company leaders. With his guidance, we continue to work together on the facilities and programs that make up the National Cyber Research Park in Bossier City,” said Louisiana Tech President Dr. Les Guice. “He is committed to developing the programs, curricula, and activities that have accelerated and will continue to strengthen the growth of a skilled workforce to support the cyber and defense-related companies in our region.”
West Monroe native John Allen was awarded the Tower Medallion in the morning graduation ceremony. The Tower Medallion accompanies induction into Louisiana Tech’s Hall of Distinguished Alumni and is the highest honor a graduate can receive. Allen, a 1973 Louisiana Tech graduate, was named the University’s Alumnus of the Year in 2012. During the ceremony, Allen’s son Chance also earned the Bachelor of Science degree from the College of Business.
“John Allen leads by setting a great example for members of the campus community,” said Brooks Hull, vice president for University Advancement. “He is generous with his time, his talent, and his support of Louisiana Tech, and we are so proud to honor him with the Tower Medallion in this spring’s commencement ceremonies.”