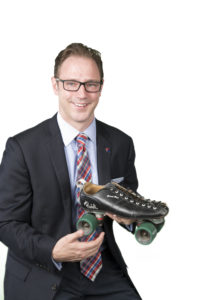 Dr. Bryan Zygmont was a disc jockey at a roller rink when he was younger.

Their connection runs three or even four generations deep, with great-grandparents’ names appearing on the Alumni Walk like beacons drawing them to the Old Red and Blue.

Others come for work or school knowing little about the University and the city it calls home. Soon, Louisiana Tech and Ruston become an integral part of who they are.

Professor Bryan Zygmont, associate dean for the College of Liberal Arts (CoLA), is one of those transplants. Since he and his family chose to move to Ruston in 2017, Zygmont has embraced Bulldog culture and serves as one of the University’s most enthusiastic ambassadors.

“I know where I started, and I know where I am,” Zygmont said. “I am amazed at the series of decisions that I made and were made for me that lead to this point. I wouldn’t be here without them.”

Zygmont is an art history professor, but his journey to this point started about as far away from a passion for studying the cultural forces that shape early American art as possible.

“I liked science,” he said. “As a freshman, I was a physiology major with plans to become a physician.”

A health crisis forced the college freshman to enroll in an evening course in art history. After his daily treatments, he would often meander through an art museum on the campus of the University of Arizona – conveniently located between his dorm room and the medical center. Zygmont found peace looking at the collection of 13th and 14th century paintings that were on display at the time, and he was hooked.

“It was a challenging semester only in part because I was sick,” Zygmont said. “That semester, I only cared about my art class. I had decent grades, but I wasn’t fulfilled.”

In today’s higher education landscape, about 60 percent of students will change their majors. The decision to move from physiology to art history was not easy for Zygmont. He emailed professors and met with one in particular seeking advice on his change of heart.

Art made his worst days better, Zygmont added, and he knew that teaching at the college level would fulfill his needs – almost better than practicing medicine would.

“My objective is always to be a better writer, thinker, and citizen of the world,” he said. “My being a professor is different in output but not different in impact. It fulfills the same needs I had when I was a college freshman.”

Zygmont was named a Fulbright Scholar in 2013 and served as Fulbright Professor of American Studies at the University of Lodz in Poland.

He was a Graduate Student Fellow at the Smithsonian Institution in Washington, D.C., and was a visiting scholar at the National Portrait Gallery. Zygmont has shared his love of learning with students across the country, including at the University of Arizona, University of Maryland, Trinity College, The George Washington University, Northwest Missouri State University, and Clarke University.

Now at Louisiana Tech, Zygmont is learning all about the academic programs that comprise the CoLA. He can be seen at concerts, exhibits, and fundraisers, and he approaches each event and interaction with the same joy, whether he’s with other professors or current and prospective students.

“This is a new challenge for me,” he said. “I appreciate the opportunity to mentor and be mentored, and I want to improve the work I do every day.”

You were a disc jockey at a roller rink. What did that teach you?

The roller skating gig has a pretty easy answer; by the time I had determined that I wanted to be an art history professor, I came to the conclusion that I needed to work on my extrovert skills (I’m an introvert by nature, and would not say that I was necessarily comfortable at public speaking). So I thought becoming a DJ was a wise way to go about it. And as time went on — and I got more and more comfortable behind a microphone — I really began to love the gig. I learned that the voice is a pretty powerful and expressive thing. One can take roll like Ferris Bueller’s history teacher, or one can announce names as if they are set to begin a couple skate…

Associate Dean of the College of Liberal Arts and Professor of Art History, Louisiana Tech University

Learn more about the College of Liberal Arts