A two-time all-conference pick at both center and linebacker for Louisiana Tech, an all-America selection in 1950, and a linebacker on the mythical all-Louisiana First 100 years of Football team, Leo Sanford recently established an endowed scholarship, the largest in Tech Athletics history, to be awarded annually to a deserving student-athlete. 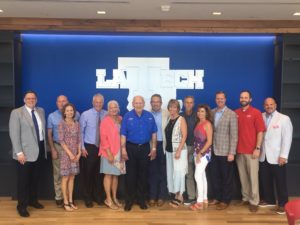 “I’ll be happy to have given the second-largest endowed scholarship if one of you other guys would step up,” Sanford said recently at the breakfast that an unofficial club of friends enjoy each Friday in Shreveport at Southfield Grill.

“Leo, you’re such an icon to us as an institution; the best part of my job is getting to say ‘thank you’ to people like you who support the University’s mission and truly understand what we’re trying to do,” Tech Vice-President for University Advancement Brooks Hull said. “We celebrate this moment and gift today, but your philanthropy started long ago.”

“Listen, it was a great day,” Sanford said. “When the president does something like that for you … the AD was there and a few others, a lot of my family. The food was great and the atmosphere was out of this world.”

“Leo has had a most positive impact on Louisiana Tech since arriving on campus 70 years ago,” Guice said. “He has set a standard of excellence, loyalty and commitment to this institution as a student athlete and alumnus that few can match. His performance as an athlete at Tech and in the NFL played a major role in elevating Tech’s reputation as a powerhouse in the Joe Aillet era, a reputation that Tech continues to benefit from today.”

“I made this investment because I think Tech is one of the finest schools you can go to, for two reasons: for education and also for athletics,” he added. “I realize we may not be in the class of majors like Notre Dame or LSU, but we play a good brand of football. And you don’t have to spend every nickel in your savings account to go to a game. You can take your whole family and you’re going to see football as good as you’ll see it played anywhere.”

The scholarship will reach all teams in Tech’s athletics department, not just football.

“Might be a basketball player or a track man,” Sanford said. “I gave it to the program to use as they see fit; whatever is best for the school and the program.”

Sanford hopes the scholarship will help an athlete who loves the game, needs the financial assistance, and is willing to persevere, which is something he knows a little about: In 1943, when he was a sophomore at Shreveport’s Fair Park High, Sanford was one of only four players on the Fair Park football squad who didn’t get game uniforms. Fifteen years later, he was wrapping up an 8-year NFL career in Yankee Stadium in “the greatest game ever played,” Sanford’s and Baltimore’s overtime victory over the New York Giants.

Such a gift as this endowed scholarship is not out of the ordinary for Sanford. Bobby Aillet, a Tech teammate for two years with Sanford, has been close friends with him since, and the two families they formed grew up together and often traveled together.

“He wouldn’t fit the mold of most of today’s linemen,” said Aillet, who retired from NCAA football officiating as one of the game’s most respected referees. “He is a very gentle man but a very hard-working linebacker. None of that ugly stuff, nasty stuff; he was strictly about tending to his business.

“I wouldn’t say he was gentle on the field, because he wasn’t,” Aillet said. “He was always a very gentle man, but a hard player. He was right there at center and linebacker, right in the middle of things. But such a kind person.”

He and his late wife Myrna, who passed away this spring, began dating when he was a student at Fair Park High in Shreveport and she was a soda jerk. From her obit:“On their first real date he told her he was going to marry her, and she told him he was crazy. While she spent the next 68 years admitting he was right, she’d also tell you he was still crazy.”

Curt Joiner, one of Leo’s son-in-laws, will tell you it’s a “good” kind of crazy. “I don’t know if there’s any guy in the world I enjoy spending an evening with more  than my father-in-law,” Joiner said.

“Leo and Myrna have maintained loyal support and involvement in Tech’s activities over many decades, frequently reuniting at Tech events with other legends from that era, while inspiring many of us by their loyalty to their alma mater,” Guice said. “Now we’ve celebrated a new standard established by Leo, the most generous athletics scholarship endowment in Tech’s history. In honoring Myrna, that gift will benefit and inspire many other student athletes and alumni in the future.”

The Sanfords, for decades a fixture at all sorts of Tech events, invested in each other and in the University, but also deeply in friendships. The weekly Friday breakfast group was started by former Tech football player and Fair Park High coach, the late Clem Henderson, with 47 present 10 years ago. Time has marched own, but a few of the longtime friends are still able to gather: Sanford and fellow former Bulldogs Aillet and Charlie Glover, former Arkansas hoops star Leo McDonald from Many, Tech supporters Glenn Price and Joe Roach, and the only LSU Tiger in the bunch, Jack Daniel.

“But,” Sanford said with a smile, “he’s still a good guy. And, we’ve got him outnumbered.”

Tech’s student-athletes have continued to increase their success in the classroom over the past decade. In the NCAA’s most recent Academic Progress Rates (APR) released in May, all 16 of Louisiana Tech’s Division I sanctioned programs remained penalty-free, and two programs recorded historical bests in their multi-year scores.

Women’s soccer and softball both recorded their highest multi-year rates at 984 and 987, respectively, while baseball, football, men’s golf, women’s basketball and women’s cross country joined them with an increase in their scores from the previous year.

Tech also posted its highest multi-year average of 965.4, besting last year’s 963.0 by 2.5 points. It marks the eighth time in the last nine years that LA Tech has boasted an average of 960 or higher on its multi-year rate.