Debate Team Heating Up For Winter 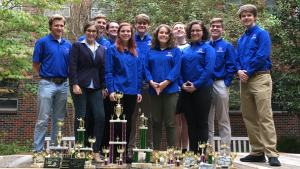 Madore was second in Extemporaneous Speaking and Impromptu Speaking in the first half and second half of the individual event competitions.

In Individual Debate, Hanna, McBride, Madore, Yeagle, and Megan Smith, the coach of the team, all broke to out-rounds. Madore, Yeagle, Hanna, and Smith all won speaker awards. Smith was first place speaker in the professional division and a semifinalist.

This fall as a team, Tech co-hosted a tournament at Stephen F. Austin University in Nacogdoches, Texas. Hanna and Katie McKenzie broke to out-rounds and were both semifinalists.

The team traveled to Forth Worth the final weekend of October and finished second place in the TCU Tournament. Hanna and Madore were semifinalists, and Madore was second place speaker. In individual events, Madore was a finalist in Extemporaneous Speaking.