Don’t hate on George Cazenavette because he made a 36, the highest score possible, on his ACT. He actually made “just” a 34 — the first time he took it. Sure, he was only a junior-to-be at Saint Paul’s School in Covington, but still… 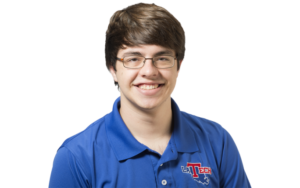 “I got 36s in math and science and a 35 in English, but I made a 30 in reading, bringing my composite down to a 34,” said Cazenavette, a Louisiana Tech triple major in cyber engineering, mathematics, and computer science set to graduate in May. “I knew I could do better in reading, so I took it again in December 2013 and made a 36 on all subjects.”

His only prep for the test, he said, was his education at Saint Paul’s. “When I told my parents I hadn’t done any outside preparation again for the second attempt,” Cazenavette said, “they were justifiably very annoyed…”

All’s well that ends well. He took the PSAT during his junior year of high school and scored a 231 which, on the scale used at the time, was high enough to qualify for national merit status. He received a National Merit Scholarship to attend Tech, where his girlfriend said she was really enjoying the nursing program.

“So my friends and I made the drive from Mandeville to take a tour,” Cazenavette said. “I met personally with Dr. (Jean) Gourd and was very impressed by the Computer Science and Cyber Engineering Program. The Presidential and National Merit scholarships at Tech are also much better than the scholarships given by other engineering schools, both in-state and throughout the country.”

The next decision was choosing a major; Cazenavette took either the easy or hard way out, depending on whether or not a person wants to earn three distinct degrees at the same time.

“I initially decided to major in cyber engineering along with computer science because cyber engineering requires more math, and I really liked math,” he said. “After taking five math classes with Dr. (Jonathan) Walters, I decided I liked math enough to pursue it as another degree…Pursuing three degrees is definitely a challenge, but I like challenging myself.”

He has a 4.0 GPA, but it hasn’t always been easy. There was Dr. (Mike) O’Neal’s Theory of Computing class, Dr. (Galen) Turner’s Graph Theory, and, when Cazenavette was a sophomore, Dr. (Arden) Moore’s Thermodynamics class, “the most worried I’ve ever been about getting a B,” he said.

“After not doing as well as I wanted on the first test and lab, I had to work hard to be consistent enough to finish the class with an A,” he said. “I usually like to start classes as well as possible so I don’t have to worry as much about the final exam.”

He’s taken mostly 12-hour quarters and four 15-hour quarters, and “the 15-hour quarters have been pretty stressful,” Cazenavette said. “Some combinations of classes are definitely easier to manage than others. For example, this fall quarter, I had three major group projects that all happened during the last two weeks of the quarter.”

It’s been well worth it though, because “I enjoy learning new things in classes,” he said. “I’ve actually been president of the LA Tech chapter of the Association of Computing Machinery since my sophomore year. It’s hard to find time to manage that between my classes, but I enjoy it.”

He also joined Tech’s jazz ensemble last year “as a way to relax,” he said, “since the workload was starting to get to me… In high school, I made the all-state band my last three years on saxophone. I played tuba in the marching band at Saint Paul’s; it was a lot of fun. We had a pretty unique band, and we were always crowd favorites during Mardi Gras in New Orleans.”

(With a heavy influence from Southern University’s band — often called the Human Jukebox — the Saint Paul’s band featuring Cazenavette and his friends was highlighted in this television news/sports clip: https://wgno.com/2018/09/03/friday-night-bands-st-pauls-has-a-style-all-their-own/)

After graduating this spring, Cazenavette plans to enroll in a Ph.D. program focusing on artificial intelligence and then become either a professor and/or a researcher in industry.

“At this point,” he said, “I’m less stressed out about school and more worried about applying for internships and graduate programs.”