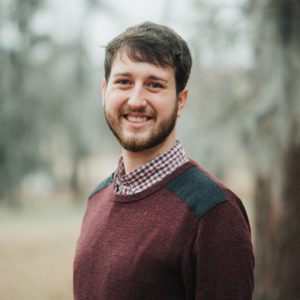 Back then, a just-out-of-Doyline High Vining had no real interest in college, much less a career in law and teaching.

“Two things happened to me at Louisiana Tech that changed my trajectory,” said Vining, who earned B.A. degrees in both journalism and psychology from Tech in 2014. “First, I was lost and didn’t know what I wanted to do with my life. I landed in the journalism department because I knew I liked writing. It soon became all-consuming. I filled my schedule with journalism classes. I joined the newspaper staff. I became a student worker for the journalism department. I still wasn’t sure what I wanted, but I knew the people around me — professors like Dr. Reginald Owens and Dr. Judith Roberts — seemed to really love their work. That’s the first time I really considered academia as a potential career path.

“Then, when I took media law with Dr. Elizabeth Christian, I found the other missing piece,” he said. “I became passionate about the First Amendment and communication law, and everything I’ve done since then has been a result of finding my passion in that classroom: getting my master’s degree, becoming a journalist, working on my Ph.D., and attending law school.”

When Vining says “everything” he’s done since has been “the result of finding my passion in that classroom,” he’s exaggerating (although not much), because there’s another passion besides the one that fuels him professionally: Allison East Vining, also a 2014 double-major, in history and journalism.

“Sophomore year, I met my future wife in Student Government,” Austin said of Allison. “Our first interaction was a disagreement over parliamentary procedure. For anyone who knows anything about us, this probably comes as no surprise.

“Later, she and I would be elected Student Body President and Class President, respectively,” he said. “There’s no doubt we bleed Tech Blue in our house.”

The two courses that “most impacted” his life were Social Psychology with Dr. Steven Toaddy and Gender Studies with Dr. Christobel Asiedu, “but I would be remiss,” he said, “not to mention some mentors who really guided me under during my formative years, including Dr. Donna Thomas and Dr. Mary Margaret Livingston from psychology and Dr. Reginald Owens and Dr. Judith Roberts from journalism.”

Vining hasn’t cooled since he got the fever during those early days at Tech. The summer after his junior year, he interned in Washington, D.C. with Senator Mary Landrieu, a once-in-a-lifetime opportunity that happened only because Dr. Owens, former head of the department and now retired, set up a meeting for him. Vining semi-returned the favor: “Allison and I nominated him and were on the committee that selected him as adviser of the year in 2014, the year we graduated; he deserved it.”

Vining was Tech’s first two-term Editor-in-Chief of The Tech Talk, “and I love it and student journalism dearly,” he said. “While at Ole Miss (to earn his M.A. in journalism), I worked with the Mississippi Scholastic Press Association, an organization that promotes high school journalism. Now, I serve on the board of directors for the Independent Florida Alligator, the nation’s oldest independent student newspaper.”

When his doctoral work is complete, he wants to work in D.C. as a media/communication lawyer, but his end goal, he said, “is to end up in academia, as a professor at a journalism or law school.”

And always in the rearview mirror is that first step, the one from Doyline and a graduating class of 29, to Ruston and Tech, a choice “that really changed things for me,” he said.

“I am a first-generation college student. I didn’t even want to go to college — a bit ironic as I am in my ninth year of higher education,” he said. “I applied to the schools that were the closest to home: Centenary College and Louisiana Tech. The public school ended up being free. I had no attachments or ties or love for the University — until I got there and experienced it.”