Sonja Bailes, Public Relations Liaison for Bossier Parish schools, former TV reporter and anchor, and member of Louisiana Tech’s Class of 1992, will serve as the keynote speaker for the University’s winter commencement ceremony at 10 a.m. Saturday, February 23, in the Thomas Assembly Center (TAC) on the Tech campus. 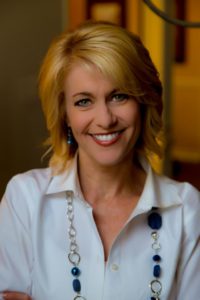 Those family and friends who are unable to attend commencement can watch the event via Facebook Live.

A graduate of Airline High in Bossier City, Bailes was awarded her BA in journalism from Tech in Winter Quarter 1992. Her advisor when she worked at KLPI, Tech’s radio station, was Tech Hall of Fame play-by-play broadcaster Dave Nitz.

“And the legendary journalist Wiley Hilburn was my advisor when I was editor of The Tech Talk,” she said. “I was blessed to learn from two of the very best.”

After graduation from Tech, Bailes was a familiar face to the area as a reporter and anchor, first for three years at KNOE-TV in Monroe, and then for KTBS-TV until 2011, when she accepted her current position with the Bossier Parish School Board.

“My years spent at Louisiana Tech were some of the happiest of my life,” she said. “I formed lifelong friendships there, memories that still make me smile and shaped and molded me into the person I am today. I could never have asked for better professors and advisers — particularly in the Journalism Department — who made me into the writer I am today. They mentored, encouraged, and instilled confidence in me, and for that, I am forever grateful.”

Her short address explores the theme of “Living Out Your Story,” a spinoff, she said, of the convocation speech she gave the freshman class in September 2013.

“It was based on the Tenets of Tech and the book This I Believe,” she said, “which really resonated with me when I was asked to read it and speak about it.”

Published in 2006, the book was a common read assignment to each freshman as part of the First Year Experience. This I Believeis a collection of the personal philosophies of a diverse group of 80 accomplished men and women.

Winter commencement officially marks the end of the winter quarter at Louisiana Tech. Spring classes are scheduled to begin March 12.