Home › Liberal Arts › Design › Jonathan Donehoo: A heart for art, a heart for others

Jonathan Donehoo: A heart for art, a heart for others

Need to be picked up late at the airport after a two-week trip? Not only would Jonathan Donehoo do that, but he’d have purchased breakfast food for you so you wouldn’t have to go to the store that night.

You’re a current or former student in a time of trouble and confusion? Call Jonathan — in the middle of the night if you just have to — and ask for advice. Everybody else has. 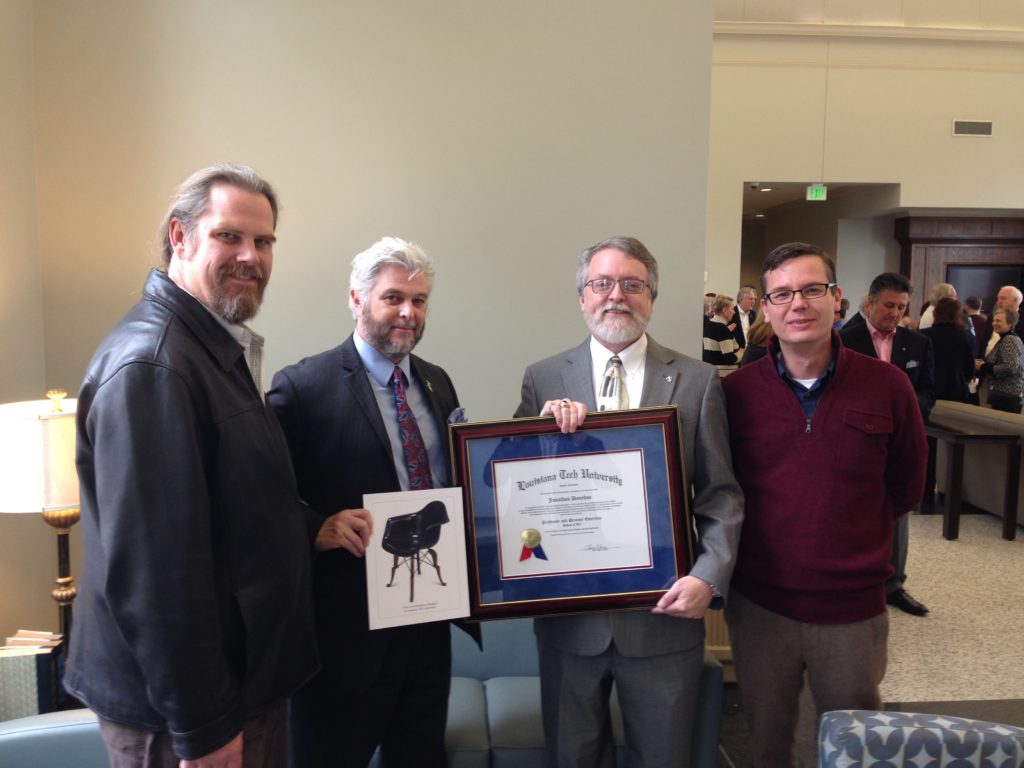 At a reception honoring his career upon his retirement in 2014, Jonathan Donehoo holds his framed document signifying his recognition as Professor and Director Emeritus of the School of Design. Pictured (from left) are his former student and colleague Patrick Miller, Dean of the College of Liberal Arts Dr. Don Kaczvinsky, Donehoo, and Director of the School of Design Karl Puljak.

Need some coffee? He does too. How quickly can you get to the Nespresso in his office in the F. Jay Taylor Visual Arts Center?

“What he truly loved and what made him happy,” said Dean Dablow, one of his closest friends, “was serving people.”

The former director of what is now called Louisiana Tech’s School of Design, Donehoo made cultivating friendships an art.

“His death,” Dablow said, “was an earthquake to those who knew him best. Jonathan Donehoo was the most gracious, caring and thoughtful man I have ever known.”

Donehoo’s sudden passing at age 65 from heart failure Feb. 28 leaves, as his obituary read, “a hole in the lives of many friends, colleagues, and family members who were blessed by his company, generosity, sage advice, and special sense of humor. He will be missed.”

Associated with Tech for more than 30 years — and from 2006 until his retirement in 2013 the Director of Tech’s School of Art —  Donehoo was appointed co-director of Tech Rome early in his career, served more than 25 years in that capacity, and radiated a deep love for both his students and travel.

“What set Jonathan apart as a traveler was his absolute passion for taking people with him on his journeys, profoundly connecting his travel companions to places around Europe,” said Karl Puljak, Tech’s current Director of the School of Design and a friend who “drank many coffees — hundreds,” Puljak said, in Donehoo’s office.

“It is not an exaggeration when I say that literally thousands of students were led by Jonathan over his years as director of the University’s Tech Rome Program and the School of Art’s French Quarter,” he said. “He delighted in opening the world to students who’d never traveled overseas, and his hope was that at the conclusion of that first trip, they would be planning for their next one. These experiences profoundly transformed the students’ view of themselves and the environment around them.”

Donehoo loved breaking the “do not photograph” rules at museums and had in his Ruston home a “uniquely Jonathan collection,” Puljak said, of cobblestones he’d swiped on each of his trips to Europe.

“He had a contact whose brother was a higher up in the Vatican, and upon receiving a request from Jonathan to visit a certain place in the Vatican, would arrange for him and a few students to be given admittance to the venue,” Dablow said. “On one such occasion he brought a handful of art students to St. Peter’s Basilica, where he was given permission to climb to the very top of the dome. Not in the walkway around the dome, but to climb a ladder into the small ball that sat at the very top of the dome. He said all they could do was just sit there and smile that they were given this once-in-a-lifetime gift.”

In another year, Donehoo used this contact to gain entry in to the Vatican archives: one year he was given permission to hold a Leonardo da Vinci manuscript, and on another he saw the actual divorce documents of Henry the Eighth.

“All of his time at Tech Rome was to benefit the students,” Dablow said. “He reveled in showing the students the great history of Rome from ancient times to the present. He was truly devoted to them.”

“Jonathan knew just where to take you and when; he was so good with the students,” said retired Tech English professor Dr. Pat Garrett, once the head of the University’s English department and a teacher in Rome with Donehoo one summer. “He taught me Rome. He knew it all, inside and out, and he knew how to share it. These were experiences students could never possibly forget.”

He didn’t stop traveling after retirement. He took friends with him to places he knew they’d enjoy — Paris, London, Rome — and “he gave them an experience they would always remember,” Dablow said.

He visited students who became grownup friends in New Orleans, Vancouver, Virginia, and on Lake Ouachita in Mount Ida, Arkansas, where he was planning to move.

Donehoo despised the taste of anything bitter — “He hated beer with a passion,” Dablow said — was a great chef, loved having friends over for dinner, treasured the opportunity to shop at Lowe’s, and “inherited his quick with from his Irish father,” Dablow said. “I often thought he could be a writer for a sit-com.”

“Jonathan’s characteristic sense of humor was sharp, quick-witted, often acerbic, and sometimes plain silly,” Puljak said. “Among his sources of inspiration were the satirical Onion magazine and the life lessons of Calvin and Hobbes. He even maintained a tabloid subscription to something called The Funny Times. Painfully, Donehoo did dive into the world of awful puns and wordplay that could only make you groan. One of his favorites was “Ban pre-shredded cheese: make America GRATE again.”

“Wherever this next journey leads my friend,” Puljak said, “I wish him smooth travel — and hope he doesn’t get held up too much at the security gate.”

A service was held to honor and celebrate his life on March 15 at the Episcopal Church of the Redeemer, in Ruston. The family requests that friends consider a gift to the Jonathan Donehoo Memorial Fund at the Louisiana Tech University Foundation. This fund will help to support students of the School of Design participate in the study abroad program that was so dear to Donehoo.

A tribute from former student and colleague Patrick Miller

I met Jonathan Donehoo in the Spring of 1997. I was in undergraduate school at The University of South Alabama looking at Graduate Programs. One of my undergrad professors, Clint Orr (a Louisiana Tech BFA/MFA graduate), recommended I go visit Jonathan in Ruston and get a sense for the MFA program.

The School of Art had recently moved from what was known as the VAB, now University Hall, into the newly refurbished Wilson Cafeteria to become the Visual Arts Center (VAC). At that time, Jonathan’s office was downstairs. Upon entering his office, Jonathan offered me a cup of the world’s finest coffee all while being surrounded by the glorious sounds of Bach’s Prelude No. 1 in C Major.

After walking him through my portfolio, we commiserated about being oldest children, ruling pens, the importance of travel, and what life is like as a teacher. We struck up an instant friendship and I made the decision in the first 30 minutes of our meeting that I needed to be in this program and learn from this incredible person.

While in the MFA Program at Louisiana Tech, Jonathan taught me how to navigate the University System, write grant proposals, develop course curricula, how to be somewhat defiant in a sea of requisite blue ink signatures by using a fountain pen with brown ink, and most importantly, how to positively connect with young people in the classroom. He taught me that it was OK to be tough, because in the end, it yielded strong students who were ready for the rigors of the workplace. He also brought out my love of teaching.

And not to miss out on a travel opportunity, Jonathan encouraged me to join him and 100 other students and faculty on the Louisiana Tech Rome Program in 1998. Jonathan lead our group to view and experience some of the finest art and architecture Europe has to offer. He also arranged for a number of unique experiences for a very select few, that included strolling on the roof of the Duomo in Milan, climbing up to and walking around the cupola atop St. Peter’s Basilica, ascending to the top of the Victor Emanuel Monument, along with many other amazing side trips. While experiencing these amazing sights and sounds, I also met who would become my future wife, Rachel Longfellow.

In 1999, I graduated with my MFA to embark on a career in academia, I interviewed and accepted my first teaching position, and Rachel and I got married. Jonathan served as one of the ushers in our wedding and walked my mom down the aisle.

Ruston became a touch point for Rachel and me. In our travels to her home in Minden, we always made a point to visit with Jonathan. We spoke regularly via phone, email, iChat, and Facetime. In 2009, Rachel and I made a decision to depart Starkville, Mississippi, where I was teaching, and return to her hometown of Minden. Within a week of our arrival, Jonathan, now Director of the School of Art, called and offered me a position on the design faculty.

I am a better person having known Jonathan Donehoo. He served as my academic mentor, my leader, my colleague, my boss, my life coach, and most importantly, my dear friend. In 2014, Jonathan retired from his life in Academia. I had the honor of preparing documentation and navigating the University System enabling him to retire with the title of Professor AND Director Emeritus. I made sure to get some of the required signatures along the way in brown ink.

Like so very many, I am a better person because of Jonathan Donehoo. And as he told me the day my father died, “May his memory be a blessing.”