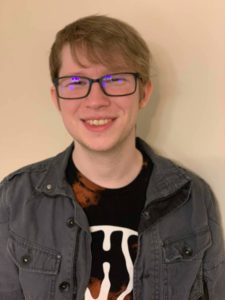 Walters, who earned his computer science degree from Tech in 2016 and is working toward his MBA, will fly 15 hours from Dallas to Shanghai, then drive to Hangzhou, the fifth largest city in the country. He’ll be learning code for the business where he interns, SEVEN Networks, a Silicon Valley company based in Marshall, Texas.

“We’ll meet with our China team (about 20 employees) that we have there,” said Walters, who will travel with three interns from other universities and Keyvan Shahrdar, SEVEN’s Director of Operations. “We’re working toward taking over some of the low-level code for our application, which is currently mostly maintained by the China team. Working closely and in-person with them will speed that process up.

The group will leave mid-month and be in China about a week.

Walters, 26, switched majors twice before sticking with computer science “because I genuinely enjoy math, science, computers, and algorithms,” he said. “I chose to get my MBA rather than my MS in computer science based on the recommendation of my computer science advisor, and I think it was the right decision.

“Software engineering is what I want to do professionally in some capacity,” he said.

“I’ve been going to the job fair at Louisiana Tech for a couple of years; my experience has been excellent,” said Shahrdar, 49, who has a master’s in computer science and is also an adjunct professor at LSU-Shreveport in the computer science department. “I’ve hired another intern from Tech to work here this summer. I recruit the Ark-La-Tex and have found the Tech students to be very well-educated.

“We own over 500 patents and currently have a few products that we’re currently working on,” Shahrdar said of SEVEN. “Our main product is AdClear, an ad block app for Android Phones that stops ads from entering into your phone. Ryan will be going to our China office to learn about our underlying code that makes AdClear work. The architecture and the modules is what he’ll learn from our China team.”

Walters is from Dallas but calls Ruston his “second hometown” now.

“I really love it here,” he said. “I received scholarships such that tuition at Tech was free during my undergraduate years, which was a very attractive incentive. The computer science curriculum and professors here are great, and the College of Business is also very nice, so I’m lucky in that regard.”