Against more than 80 other competitors, Louisiana Tech junior political science major Leah Hannah was Champion of the Varsity Division in the recent 2019 International Public Debate Association (IPDA) National Championship, the top achievement in an exceptional performance by Tech’s team. 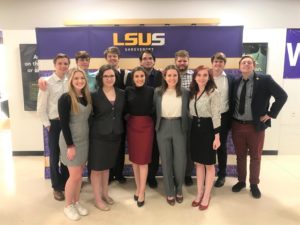 Tech placed in the Top 10 of more than 40 schools nationwide that competed in the tournament co-hosted by Tech, Bossier Parish Community College, and LSU-Shreveport. Tech was 11th in the nation in Season Long (total points added up for each tournament all year), and sixth nationally in both the Varsity and Professional divisions.

Nate Foster, senior accounting major, was one of the top speakers in Team Debate at the tournament.

Hannah and Megan Smith, the team’s coach, travel to West Chester University in Pennsylvania the final week in April for the Interstate Oratorical Society National Tournament, the oldest speech competition in the nation. Hanna qualified for the tournament in persuasive speaking when she won 1st place in Louisiana with her persuasive speech at the Southern Forensics Championship Tournament in January.

The purpose of Tech’s Debate Team is to promote rhetoric, argumentation, education, and forensic skills. For more information, contact Smith in Tech’s Department of Communication at megan@latech.edu