NFL Hall of Famer and four-time Super Bowl winning quarterback Terry Bradshaw, a record-setting Bulldog and favorite son of Louisiana Tech, will serve as commencement speaker for Tech’s Spring Ceremonies Saturday, May 25 in Thomas Assembly Center on the Ruston campus. 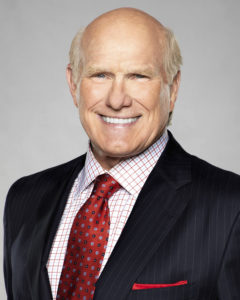 The No. 1 pick in the 1970 NFL Draft after his historic career at Tech, Bradshaw is widely acknowledged as today’s preeminent NFL studio personality. He has been with FOX NFL SUNDAY since its inception in 1994, and his work on America’s most-watched NFL pregame show earned him three Sports Emmy Awards in the Outstanding Sports Personality/Analyst category in 1999, 2001, and 2008. Super Bowl LI was Bradshaw’s eighth championship assignment for FOX, his 11th as a broadcaster and his 15th overall, including as a player.

After his football career at Tech, Bradshaw became one of the most prolific quarterbacks in pro football history. He led the Pittsburgh Steelers to four Super Bowl championships, six AFC championship games, and eight straight playoff appearances (1972-79). Bradshaw, a two-time Super Bowl MVP (Super Bowls XIII and XIV), was a four-time All-Pro. He retired just prior to the 1984 season and began his broadcasting career with CBS.

In addition to his broadcasting career, Bradshaw has appeared in several feature films and TV shows and has written five autobiographical books. Bradshaw spends his time at his home in Oklahoma with his wife Tammy and has three daughters, Rachel, Erin, and Lacey.