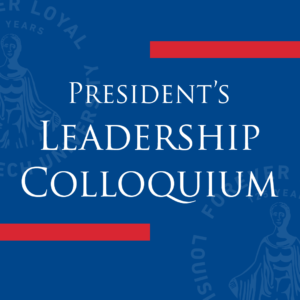 Charles Gandy, who graduated from Louisiana Tech’s College of Engineering and Science (COES) in 1955, will be the inaugural speaker in the President’s Leadership Colloquium speaker series. Gandy is the subject of a recently de-classified true story about a life-and-death counter-intelligence challenge and the race to find a leak in the United States Embassy in Moscow before more American assets are identified and killed.

Tied to the University’s 125th anniversary, the President’s Leadership Colloquium will feature speakers on the Tech Tenet of Leadership and how that tenet has been expressed throughout the course of their lives.

Gandy’s story has recently been turned into a novel, The Spy in Moscow Station: A Counterspy’s Hunt for a Deadly Cold War, written by former Director of Research at the National Security Agency (NSA) Eric Haseltine. The book follows Gandy, who was an NSA-Central Security Service (CSS) Hall of Honor inductee (2008) and former Tech COES Alum of the Year.

As part of a book tour, Gandy, Haseltine, and his wife and frequent co-author Chris Gilbert (MD, PhD) will visit Ruston for a brief presentation and book signing at 8:30 a.m. Friday, May 17 in Wyly Auditorium. The public is invited. 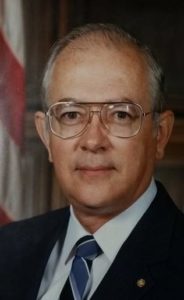 Released April 30 by Macmillan Publishing/Thomas Dunne Books/St. Martin’s Press, The Spy in Moscow Station will be available for purchase at the presentation.

“Most people thought he was just another bureaucrat who ‘worked for the government,’” said Gandy’s son, Chuck. “That couldn’t be further from the truth.”

There was a hint he might be more than “just another bureaucrat” when he was promoted to “Senior Cryptologic Executive Service” (SES) and when he was inducted into the NSA Hall of Honor. Turns out he’s one of those guys who, if you asked him at the class reunion, “So, what are you doing now Charles?, he could have said, legitimately, “Well I could tell you, but then I’d have to kill you.”

“Dr. Haseltine’s book reveals the struggles he overcame, both internal and foreign, to save lives in Moscow and protect U.S. citizenry back home,” Chuck said. “Some of his Lincoln Parish friends are going to be surprised.”

“Outsmarting honey traps and encroaching deep enough into enemy territory to perform complicated technical investigations, Gandy accomplished his mission in Russia but discovered more than State and CIA (Central Intelligence Agency) wanted him to know,” Gen. Michael V. Hayden (Retd.), Former Director of the NSA & CIA, writes in the book’s forward. “…This is the true story of unorthodox, underdog intelligence officers who fought an uphill battle against their own government to prove that the KGB had pulled off the most devastating penetration of U.S. national security in history.”

After his graduation from Tech, Gandy’s first assignment to the NSA in 1955 was as an Air Force 1st Lieutenant. He retired as a civilian in 1986.

In between, reads his 2008 NSA/CSS Hall of Honor bio, Gandy “made significant contributions to the fields of signals intelligence, information assurance, and counterintelligence. His work in research, development, and deployment of quick reaction capabilities greatly strengthened cryptologic community support to the highest levels of government…Mr. Gandy’s contributions enabled the NSA to anticipate key activities of foreign adversaries and determine where our own vulnerabilities existed. Much of this engineering work was in sensitive signals analysis and countermeasures development… Mr. Gandy’s lifetime of creativity and innovation in the use of advanced technology led to numerous successes. Many senior leaders…frequently relied on Mr. Gandy to tackle mission issues that were both exceptionally challenging and exceptionally sensitive.”

After leaving the NSA, Gandy continued his research activities. He developed a special radar that detected breathing and heart rate for people trapped in rubble of collapsed buildings.

If you’re a good spy, most people won’t know your professional history. Until now, that’s been true with Gandy. But some of the Gandy family history is a bit more known — although most people don’t realize it.

“Dad met and married my mom, Freda Grambling, who grew up at 510 Spencer Street near the Tech Campus in Ruston,” Chuck said. “Her great-great-great grandfather (Judson H. Grambling) ran the sawmill that became the whistle-stop on the L&N Railroad.”

He donated land for construction of the school that is today Grambling State University.

Haseltine, a PhD neuroscientist and formerly the Associate Director of National Intelligence in charge of Science and Technology for the U.S. Intelligence community, has authored or co-authored 15 patents in optics, special effects, and electronic media. Before joining the NSA, he was, among many other positions, Executive Vice President of Disney Imagineering.