May 24, Louisiana Tech University’s annual hackfest, Cyber Storm, made its 10th landing in Ruston. Nearly 100 students, composing 12 teams, built and protected cyber networks from intrusion while solving puzzles and trying to hack into other teams’ networks. 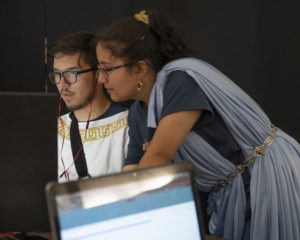 The “Roman” team works on its network.

Dr. Jean Gourd, associate professor of computer science and cyber engineering and program chair of computer science, says that this year, students brought a playful level of creativity to solving the assortment of challenges created by industrial, government and academic leaders.

“The Romans came dressed for the occasion and ended up in second place,” Gourd said. “One of the world’s oldest civilizations, the Egyptians, took home the top prize – bragging rights! In all, several dozen challenges were deployed, and students raced to complete them during the 8 hours of the event. GDIT provided food and drinks, and even participated in mentoring the teams. In the end, it was a successful 10th year of Cyber Storm!”

Cyber Storm provides Louisiana Tech students enrolled in upper-level computer science and cyber engineering with an opportunity to show industry and government attendees what they’ve learned in their courses. Teams compete against each other and a black ops team of intruders from academia, industry and government institutions. Teams earn points using networks that they have built, completing challenges on cyber security, wireless network and steganography and cyber scavenger hunts.