Hurtig presents at international conference on French language and culture 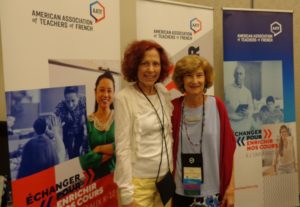 Dr. Dolliann Hurtig, professor of French in the School of Literature and Language at Louisiana Tech University, hosted a three-hour workshop on the book Allons au cinéma: Promoting French through films, Volume III, at the American Association of Teachers of French National Convention in Philadelphia this summer.

Hurtig presided over an additional session, the Commission Session, in her role as Co-Chair of the Commission on Cinema. The convention featured more than 120 sessions and workshops where members learned more about French language, French and Francophone culture, Francophone literature, pedagogy and the history of Philadelphia and its unique relationship to France.

The American Association of Teachers of French is the largest association in the United States for French teachers and professors, founded in 1927.

After the AATF National Convention, Hurtig spent a month at the Grande Ecole, Hautes Etudes Commerciales (HEC), in Montréal, Canada, where she enjoyed the status of visiting professor during July and August. She plans to write an article on her experiences at HEC during the summer session, both inside and outside the classroom, visiting the business community in Montreal, its profit and non-profit organizations, and enjoying the rich culture of a vibrant bilingual city.