Tech’s oldest student honored for her example and inspiration 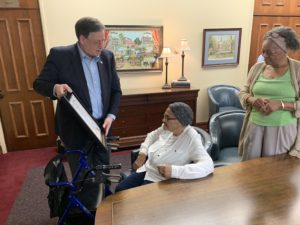 But that’s not a test score. She turned 100 that day and celebrated bigtime, first by taking part in the Tech Department of Kinesiology’s Senior Water Aerobics Program in Lambright’s indoor pool — she’s been participating regularly since she turned 90 — and then by being the object of a surprise party thrown by faculty.

Wednesday in the conference room on the 16th Floor of Wyly Tower, Tech’s oldest student received another surprise: Tech President Dr. Les Guice gave the “senior” student everyone calls “Mrs. Cee Cee” a framed proclamation for providing “great inspiration and motivation to her classmates and instructors and to the Kinesiology students” and for being a living illustration of the Tenets of Tech.

“You are impacting and influencing a lot of people,” Guice told Mrs. Cee Cee. “You’re an example for all of us that we should never stop learning.”

Joining Cee Cee for the presentation were two of her classmates — one of her four daughters, Jon Jon Givens, and Jon Jon’s son and Cee Cee’s grandson, Gary Richmond, who recently turned 55 and became eligible for the class. He used to drive his grandmother and mother to the class. Now, he drives them and dives in.

After a fall when she neared 90 scared her, she found the 42-year-old Senior Water Aerobics program at Tech.

“I began to lose my equilibrium in my 80s, and for three years my doctor was telling me to find a place where I could exercise in the water,” Cee Cee said. “Nobody knew a place. 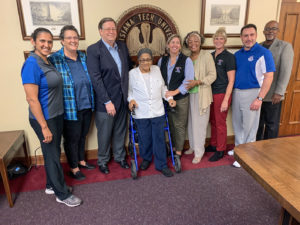 “Then my niece in Shreveport told me to go to Tech, that they have a class for 55 and up. She told me, ‘You could be the ‘up.’”

She does almost all the other things her classmates do, but her fear of the water keeps her from sitting on a floatboard or getting too far away from something that’s land-based. She’ll hold the wall or rail with one hand and work one arm at a time, then kick her feet.

“I do most of it,” she said. “It’s helped an awful lot. I suggest to everybody who has a problem or even if you don’t have a problem, get in the water. If I can do it, they can do it.”

“She definitely the Queen of the class,” said Smiley Reeves, a member of Tech’s Department of Kinesiology, head instructor of the class, and one of several smiling faculty members who attended Wednesday’s special event in honor of Cee Cee, one of Tech’s more independent students, despite her use of a rolling walker.

“If you try to help her with anything, she slaps your hand,” Reeves said. “We’ve all had our hands slapped.”

Guice also gave Cee Cee a special Tenet Medallion and praised her for modeling the tenets.

“It’s incredible,” he said, “how many people you’ve influenced. You inspire everyone with what you’re doing.”

For more information about Tech’s senior fitness programs, call Lacey Deal in Tech’s Department of Kinesiology at 318.257.5458 or email her at ldeal@latech.edu.