Louisiana Tech Athletics Hall of Famer O.K. “Buddy” Davis, whose storytelling as Executive Sports Editor of the Ruston Daily Leader entertained and informed Lincoln Parish friends and families about their favorite local and national sports heroes for more than five decades, is still writing stories with happy endings, even nearly four months after his passing in July at age 72. 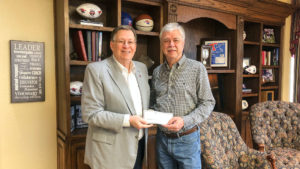 Buddy’s estate has donated $100,000 to Tech Athletics to be used as the athletic department determines; a part of the donation will complete the O.K. “Buddy” Davis Endowed Scholarship that began in July.

“I don’t know if any writer other than Buddy has ever written so much for so long about his alma mater, and in such a positive and encouraging way,” said Tech Athletics Director Tommy McClelland. “His most recent contribution to Louisiana Tech will continue to benefit student-athletes in Tech’s athletic programs that Buddy promoted for so many years. As he did each day we knew him, Buddy ran through the tape and finished strong, an inspiration to all of us.”

“He’s loved Tech his whole life; Tech Athletics and Grambling, those were the things he invested so much of himself in,” Hohlt said. “This is Buddy’s way of giving back to the community he loved.”

Offered other more high-profile jobs during his career, Buddy never wanted to leave his friends and family and the opportunities of Lincoln Parish.

“I was always eager to open the Ruston paper to read Buddy’s latest article because I knew he would offer lots of meaningful information about athletics, mostly from his heart, that would pleasantly surprise me,” Guice said. “Well, he did it again with this remarkable donation. He saved this special gift until the end and surprised us with what he had been doing all of these years — saving his money to give back to those things that he loved the most. Thank you so much, Buddy.”

Buddy suffered a stroke in July of 2013 and died from complications of the stroke on July 13, 2019 in Ruston.

“When he wrote, he never put anyone down,” said former LA Tech track and field star and close friend John Allen. “What he did was aim to make things better for everybody, to build people up and encourage them. I miss him every day.”