Harris Hall is no more and Harper Hall will soon be gone to make room for more green space, pleasant walks, and noble trees that will enhance Louisiana Tech’s Centennial Plaza, link to the Quad, and better connect Spirit Park to the campus core.

All the abatement and preliminary demolition is complete at Harper, and a crane began exterior demolition on July 25.

The buildings were in dire need of renovation and upgrades; architects analyzed the cost of modernizing the buildings and determined it was better to construct new or simply remove the buildings, then beautify the space.

Completed in 1957, Harris originally had been the school infirmary, then offices for Student Housing, and most recently a check-in spot for custodial and maintenance crews and storage.

Completed in 1964, Harper was a female dormitory and, next to 16-story Wyly Tower, the second highest building in Ruston at eight stories, or 98 feet; Wyly is 195 feet tall.

Harper had been used for storage since it last housed students two years ago.

Also, a new Harper opened in the Fall of 2017; Harper and Pearce Commons make up Legacy Park. These co-ed buildings consist of townhome apartments and two-bedroom, one-bath apartments along California Avenue.

The original Harper Hall would be 110 now. Completed for women in 1910, it was on the same spot as the Harper Hall now being demolished. On social media to an old friend, Tech President Dr. Les Guice explained it this way: “I hate to mention this to you, but we already have a NEWER Harper (Commons). So the new Harper is now the old Harper, and the old Harper is now the old, old Harper.” 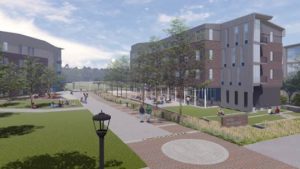 Also, west of Tech Drive and south of the railroad track, space is being made ready for 600 beds of new housing, multi-use green space, intramurals, and parking. When completed it will take the place of Mitchell, Cottingham, and Richardson dorms. Richardson has not housed students since the 1980s and is currently used by art students as studio space. Mitchell and Cottingham will house students this year, then all three old dorms are scheduled for demolition next summer.

The new housing at this site will be similar to the new Aswell and Dudley suites, which opened in 2018. Those suites are designed with a first floor common space — community kitchen, dining and living area, TV and study tables — and the second and third floors of each are gender-specific bedrooms and a common area.