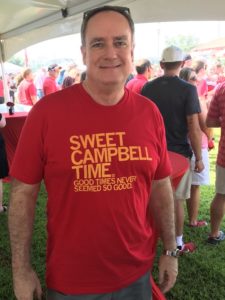 Camden, Arkansas native Bill Campbell is the Director of Communications for the City of Jonesboro, Arkansas. He graduated from Louisiana Tech with a degree in journalism and served as a student assistant in what at the time was called Sports Information. He covered national college football and other sports for both The Times-Picayune and the Dallas Morning News, and once had a back-row seat to concerts in Memorial Gym, now Scotty Robertson Memorial Gym, and later in Thomas Assembly Center. Here are his Top 5 Concerts, presented by Tech’s Union Board, from his days as a Tech student. It’s sort of a time capsule musical education.