Chris Richardson, a 1972 psychology graduate of Louisiana Tech, the University’s 2017 Alumnus of the Year, and president and owner of Blazer Building, Inc., Blazer Real Estate Services, and Creekside Nursery, is the University’s newest Tower Medallion Recipient. 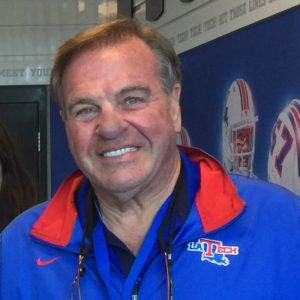 As the recipient of the Tower Medallion, Richardson will be inducted by the Louisiana Tech Alumni Association into Tech’s Hall of Distinguished Alumni during a private luncheon Friday, May 21.

The Tower Medallion Award signifies membership in the Hall and is awarded to Tech alumni who have distinguished themselves by exceptional achievement, community service, and humanitarian activities.

“Chris Richardson is one of the best friends our University has,” Tech President Dr. Les Guice said.“Each initiative he and his family have invested in through the years positively impacts every student, faculty, staff, and friend of Louisiana Tech. He believes in our mission and continues to show it by being a difference maker for his University.”

A native of Benton, just north of Shreveport-Bossier City, Richardson was a team captain in 1971 when he helped lead the Football Bulldogs to a 9-2 record, a Southland Conference championship, and a victory over Eastern Michigan in the Pioneer Bowl in the NCAA Division II Midwest Region Championship.

So began what’s come to be called “The Golden Era of Tech Football.” The SLC title in ’71 was the first of four straight; Tech also won national championships in 1972 (National Football Foundation), 1973 (NCAA) and 1974 (UPI).

In 2018, as part of the celebration to honor the first 50 years of action in Joe Aillet Stadium, Richardson was chosen as one of the Top 50 Bulldog players to compete at The Joe.

Today the Houston businessman remains just as active and passionate off the field today as he was on it during his championship seasons as a Bulldog. Last year, Richardson and his wife Anne — they met while students at Tech — made the lead gift to Tech Athletics for a future showcase project that will further upgrade an athletic program that is seeing more enhancements than ever before in such a short period of time.

In 2017, the Richardson Family made the lead gift for construction of the suite level for Tech’s new suites and press box facility that opened on the first weekend of the 2017 football season. The Chris Richardson Family Suite Level is an indoor gathering place on game days and is used year-round for media announcements, socials, workshops, and team celebrations.

Through the years, Richardson has supported many other initiatives that directly and positively impact Tech’s chances at winning championships, including scholarships, the Bradshaw/Brooks Golf Tournament, and construction of the Davison Athletics Complex.

Anne and Richardson, Lifetime Vice President and Executive Committee Member of the Houston Livestock Show and Rodeo, have served as Co-Chairs of the Cystic Fibrosis Ben Johnson Fundraiser. Richardson has also served on the Allied Memorial Bank Board, Louisiana Tech Foundation Board, and has contributed to many other organizations and fundraisers.

Richardson received a scholarship to fund his college education, which has long inspired him to give back. Agriculture and education have been fundamental themes in his life. Education is a cause that is extremely important to him and has been a philanthropic focus for him for many years. For decades, Richardson has shared the University’s vision and remains committed to doing all he can to help Tech reach its potential as a global university.

A lifetime member of the Louisiana Tech Alumni Association, he and Anne, a Tech alumna, have three grown children and six grandchildren.