After spending the majority of the 2020-21 academic year unable to participate in large events due to COVID restrictions, Louisiana Tech University’s Aerospace Club closed out the year at the Chennault International Airshow, where members talked to kids about science, technology, engineering, and mathematics education.

Six members of the Aerospace Club traveled to Lake Charles in early June to volunteer at the show and enjoy the demonstrations. 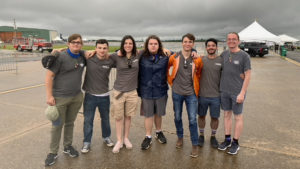 Perry coordinated the club’s participation with the airshow director, Mary Jo Bales, who also provided the club with information on how to fund Aerospace Club projects. Infrastructure, Consulting, and Engineering, PLLC donated funding for the club to buy a drone, which the team used to teach children at the airshow about STEM (science, technology, engineering, and mathematics) education and careers, aerospace engineering, and engineering in general.

“The airshow was a wonderful event to volunteer for,” Perry said. “Not only did I make friends with the people I worked with, but I also helped assist in one of the – in my opinion –  most amazing airshows in the world! I joined the Aerospace Club due to their amazing projects with weather balloons in the years before I arrived at Louisiana Tech University. I’ve always had a passion for aerospace, especially in the rocketry field, and this club is the perfect opportunity to work on projects which are much more difficult to do alone.

“The airshow’s schedule and preparation was immaculately perfect and takes years to pull off. This taught me the extreme precision and organization that is required to work in the aerospace industry.”

“Chris is also a large part of the reason I joined the club,” Savoie added. “I went to high school with them, and they talked about it a lot before we even got to Tech. I didn’t really decide to join though until I went to the first meeting freshman year. The most important thing I learned at the airshow is how cool fighter jets are.”

Simmons says that the airshow highlighted the reasons he joined the Aerospace Club.

“It was amazing. Seeing planes like the F-15, F-16, and F-22 on a video is nothing compared to seeing them in person,” he said. “I have always been interested in aircraft, even as a little kid. I had posters of B2 bombers and F-18s on my walls. When I came to Louisiana Tech I wanted to be involved. When I found a club that focused on aerospace, I knew it was the club for me.”

“Several of the other volunteers were past military, so they had some incredible stories to tell,” Goldsby added, “and it was a generally gratifying experience to help put the show on and keep it going smoothly, even as we worked with an atypical format for this particular event. I joined the Aerospace Engineering Club because I am personally very passionate about spaceflight and the engineering behind it, and wanted to meet other people with similar interests and get involved in fun projects like this one.”

LaBruyere points out that in addition to getting to watch the airshow, he has worked through problems that the aerospace industry commonly has.

“Since my first year with Louisiana Tech, my goal has been to work in the aerospace industry. I joined the Aerospace Club the year it was founded and got to work. I have participated in many projects and teams over the years and even had the privilege of being the club’s secretary this past year.

“This summer, I am finishing up my last classes, and I will be graduating in August. I am beyond excited to be finished and moving on to bigger and better things, and I am confident the club will thrive in the years to come. If anyone is interested in learning more about drones, rocketry, or aerospace in general, I recommend they check out the Louisiana Tech Aerospace Club.”

Headrick, who has joined Syncom Space Services at Stennis Space Center and is working as a structural engineer in support of the National Aeronautics and Space Administration, says that while he enjoyed the show, he was also impressed by the initiative that Perry and the rest of the team took in organizing the Aerospace Club’s attendance of the event.

“The Chennault Airshow was beyond fantastic. A weekend of serving drinks with my friends while WWII bombers, stunt planes, fighter jets, and paratroopers were flying overhead are memories I’ll never forget. We ended up volunteering alongside a lot of military veterans who were a lot of fun to work with. We were some of the youngest volunteers there. The most important thing I learned at the airshow was that the Aerospace Club is going to be in very good hands next year.”

The club will expand its reach next year and will establish a drone racing team and a design, build, fly team over the summer and begin competing in these events in the fall.