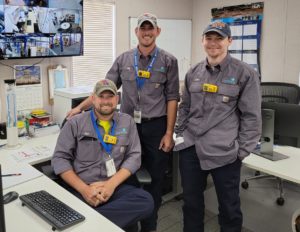 Louisiana Tech College of Engineering and Science alumni Will Smith (’11), Tyler Petty (’18) and Ben Browning (’11) are all project engineers at Standard Lithium’s south Arkansas direct lithium extraction project. The facility, a pre-commercial demonstration facility, is revolutionizing the U.S. lithium production industry and moving the country closer than ever to its first new lithium project in more than 50 years.

Smith, who has been with Standard Lithium since November 2019, is a native of El Dorado, Arkansas, and was the first project engineer hired by the company to work at the pre-commercial demonstration facility. Prior to joining Standard, Smith was a Senior Mechanical Design Engineer with Aerojet Rocketdyne.

Smith shared his enthusiasm for the work being done, citing the project’s positive environmental aspects and the long-term benefits for American energy-independence that comes through having a secure domestic source of the critical mineral.

“Standard Lithium’s presence not only impacts our community but everyone around us. It brings jobs and economic opportunity. Lithium plays a huge part in our daily lives, and it’s only going to become more important,” Smith said. “The education and experience that I gained at Louisiana Tech has been invaluable to me as I’ve worked on this project — from construction to process startup and now getting to see lithium being produced.”

Tyler Petty was hired on as an operator with Standard Lithium in late 2020. He quickly gained experience in the plant and was promoted in early 2021 to Project Engineer.

“The hands-on and classroom experiences that I had at Louisiana Tech made me well prepared for my role with Standard. Many of the things I do daily – programming, installing equipment, troubleshooting, etc. – I learned or developed at Tech,” said Petty. “Working on Standard Lithium’s project is a great opportunity in itself, being a first-of-its-kind lithium extraction plant. Being a native of the area, it’s great to hear so many people talking about and I’m excited to see the company grow to its full potential.”

Ben Browning, a life-long resident of Louisiana, joined Standard Lithium in February 2021 as a Project Engineer after working for nearly a decade in the oil and gas industry, including stints with ExxonMobil and Valero. As undergraduates, Browning and Smith were both members of Louisiana Tech’s Pi Kappa Phi chapter, though Browning came to the project independent of his former fraternity brother.

Browning said he feels privileged to be involved with an innovative company.

“I feel extremely fortunate to work for Standard Lithium,” Browning said. “Having worked in oil and gas my entire career, I’m excited that this opportunity has allowed me to bring the skills and knowledge I’ve developed into such a new, innovative process. The education I received at Louisiana Tech has played a key role in my career, and not just from a technical standpoint – during my time there, I really gained an appreciation for how the work we do today can have a positive impact tomorrow on the local community as well as the world at large.”

Bruce Seitz, the Plant Manager at Standard Lithium’s Arkansas facility shared his praise for the three Louisiana Tech graduates, saying, “Having three engineering graduates from the same university really compliments the ‘family’ atmosphere. I look at Will, Tyler, and Ben as brothers. They gel harmoniously, and everyone helps each other out, and all three have been able to tackle specific roles and responsibilities. I couldn’t be happier about all three of these gentlemen as part of the Standard Lithium family.”

“Since Standard’s direct lithium extraction facility came on-line in Arkansas our engineers on the ground have been crucial to the company’s success,” Robinson said. “Because of their ability to integrate into our world-wide team, and respond to the needs of our technical advisors, we’ve been able to refine and enhance the process and secure critical data that have helped us keep the project moving forward. Travel restrictions created by COVID kept many of our scientific advisors from being able to visit the facility in-person, but Will, Tyler, Ben, and all our engineers have answered the call. Their performance is helping Standard and the Southern Arkansas region to take the lead in a highly competitive, rapidly expanding global industry.”

Standard Lithium, which is a publicly traded company, chose south Arkansas as a key development target due to its large resource potential, pro-business environment, and availability of a highly skilled work force. The company’s flagship 150,000+ acre project is located atop a geological formation known as the Smackover Formation, which is a globally significant brine resource that’s rich in lithium.