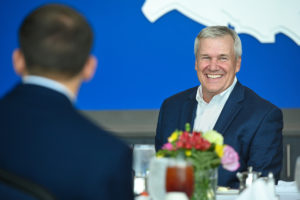 King received the surprise recognition and a framed proclamation at a small luncheon in his honor last Friday in the Chris Richardson Family Suite Level of Joe Aillet Stadium.

He joked Monday that “emeritus” is Latin for “has been.” But that’s hardly the case. Even as he said it, King was in his Jeep on the site of the University’s newest housing project, south of the railroad tracks and west of Tech Drive, scheduled to open to Fall Quarter students Friday.

Although he retired from his full-time position at Louisiana Tech two years ago, King has still been working half-time, helping to complete projects all over campus that began on his watch, including on-going housing projects, re-doing the campus core, updating Centennial Plaza, and “finishing out some other little projects across the campus,” he said. “We’ve got more than a half-dozen different things. I started it and I wanted to see it through.”

Because of Hurricane Ida, the new housing project won’t be completely finished Friday; work will be on-going on the exterior, but the interior will be complete and safe for students, despite extraordinary challenges.

“I guess we could sum it up,” King said, ever the quick wit, “by saying never attempt to build a 400-bed residential project during a pandemic, two hurricanes, and two tornados. Oh, and a snowstorm.”

King earned his first paycheck from Tech when he came to the University in August 1981 as a sophomore and was hired as a student worker in the housing department. After completing his graduate work, he was hired full-time by housing, then became Vice President of Student Affairs at the turn of the century.

“I found a home here,” he said. “I’ve had a lot of titles; I guess they were always figuring out what I could do. ‘Well, that didn’t work out, so let’s see if he can do this.’”

The days of three guys to a dorm room with no air-conditioning and King as an RA are long gone, as evidenced by new apartment-style, courtyard housing developments and improvements campus-wide.  Corporate partnerships with organizations like Barnes & Noble, Chick-Fil-A, and McAlister’s have also given students new shopping and dining options.

King said he was “humbled and surprised” at the luncheon hosted by his boss and University President Dr. Les Guice, and he praised his “super staff” and talented colleagues he’s worked with through the years, past and present. Two of those colleagues, former Tech VPs Corre Stegall and Jean Hall, who hired King as a student in 1981, were among those honoring their longtime friend Thursday.

Also present were King’s wife Lori, their daughter Abbie, and her fiancé Seth Gordon. (The couple’s other child, son Collin, was in Denver.)

“I knew when I stepped back quietly a couple of years ago, I wanted to remain engaged,” said King, who for the foreseeable future will likely continue to be seen on campus where improvements are being made. “I’m always willing to assist the University any way I can.”