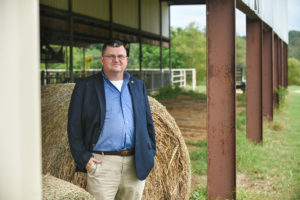 Murphey will receive the award during the 94th National FFA Convention & Expo in Indianapolis, Indiana, Oct. 29. All recipients will receive a plaque and medal, and their names will be permanently recorded as recipients of the highest FFA honor.

“Dr. Mark Murphey has a long and distinguished history of supporting agricultural education and the National FFA Organization through conducting outstanding career development events and other educational contributions at the area and state levels,” College of Applied and Natural Sciences Dean Dr. Gary Kennedy said. “This recognition for his exceptional support of the FFA organization and its members and teachers is very well-deserved.”

Interesting coincidence that Murphey would end up in agricultural; his dad and his family left farming in the 1950s because they were starving. They would up in Odessa, Texas, where his father began working in the oil field.

“Fast forward to when I was 6 when my dad took a job 30 miles from town in the middle of 22,000 acres of sand, mesquite trees, and oil wells,” Murphey said. “Growing up, I always enjoyed the Ag part of my life and convinced my parents to allow me to get a flock of chickens, eventually some rabbits, and then to join 4-H showing chickens and swine. I was fortunate to have parents who supported my desires to work with livestock and pursue my passions.”

He joined 4-H at school, and his parents would haul him the half-hour to town to attend 4-H meetings and other activities.

“I was able to have a great 4-H agent, Fred Wilkinson, who always took the time to patiently answer the many dumb questions I would ask,” Murphey said. “I still carry with me the memories of the time and effort that county agents and adult leaders invested in me and helped develop my passion for livestock. One adult leader, Bobby Butler, mentored me past 4-H into college; he is most likely the one to blame for my passion for swine.”

It wasn’t until college that he discovered FFA and learned about the organization through assisting with contests at Sul Ross State University in Alpine, Texas, where he earned his undergrad and master’s degrees, and then at Texas A&M, where he earned his PhD and, through lots of friends, had opportunities to be a part of FFA at their high schools.

“I knew at an early age that I had a ‘God calling’ to be a part of the most important industry to the world: agriculture,” Murphey said. “(But) I never dreamed I would be a professor. As a kid growing up, I had no clue about what a professor was.

“I was fortunate to have parents that believed in God, hard work, and education,” he said. “My dad had to quit high school in tenth grade when his dad had a heart attack and needed help. My mother was one of six children of a single parent; she had to quit school in seventh grade to help support her family. I didn’t realize how fortunate I was until later in life at the opportunities that my parents worked hard to give me and my siblings.”

What he thought would be a career in production agriculture or as a county agent or veterinarian turned into higher education instead, and much of his teaching comes through volunteering.

“I had limited FFA experience and probably could not spell it correctly until I made it to Tech,” Murphey said. “It wasn’t long after my arrival in Ruston in December of 1997 that I began working with both the 4-H and FFA organizations. We hold several contests each year on campus with the FFA. It eventually led to training sessions with both small and large groups, workshops at the state convention, setting up a booth at the convention, having various schools come to tour South Campus, working with Ag teachers, serving on the nomination committee for State Officers, feeding the State officers, convention workers, nominating committee and state officer applicants each year at the start of the convention, hosting an alumni luncheon and gathering each year for the Ag teachers, coordinating state contests, developing an online state livestock judging contest in 2020, along with some other activities.

“In all honesty, I am greatly humbled by this award,” he said. “I’ve never set out to gather an award, and I certainly feel that there are more qualified individuals — and that I am way too young to get an award like this.”

Murphey feels his job “goes beyond teaching,” that part of his job is helping students develop life skills that will benefit them all through their lives, and that another part is to promote the importance of agriculture.

“Only 2 percent or less of our population are directly involved in production agriculture, and still we are able to feed and clothe most of the world,” he said. “The FFA has developed a process to instill and develop in its members a servant’s heart, a leader’s heart, and a passion to leave the world a better place than they found it. I embrace that philosophy. The FFA students who make it to Tech are some of our most capable and best students: they have an ability to think and a desire to participate and to impact the world in a positive place. I hope I’m able to assist them and other students in continuing that path as they travel through Tech Agriculture.

“I don’t think I do anything special with my FFA activities,” he said. “I’m fortunate that my job is my passion in my life. Who would have thought 30-plus years ago that my ‘God calling’ into agriculture would be what it is? The days that I get to work with students — to see them discover their path in life and to achieve their goals — is absolutely priceless and why I get out of bed at 5:30 each morning, come to work, and often not make it home until after dark. I could deal with less paperwork — but that’s a different story.”