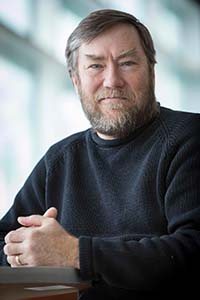 Dr. Jim Kinnison, who has served as the mission system engineer for the National Aeronautics and Space Administration (NASA) Parker Solar Probe since the mission concept study began in 2007, will give a talk on his work with the project at 6:30 p.m. Thursday, Oct. 21, in Room 106 of the Integrated Engineering and Science Building. Kinnison will also give the weekly Science Seminar at 4 p.m. the same day in Carson-Taylor Hall, Room 322.

Both talks will cover Kinnison’s work on the Parker Solar Probe and will include how the project started, as well as advances in the equipment and data capture techniques used in the missions. He will introduce the science behind the mission, the engineering that let humans “touch” the sun, and discoveries from the first three years.

The Parker Solar Probe has completed nine flights through the energetic atmosphere around the sun, getting as close as four million miles from the sun while actually touching it. The probe must survive intense heat and radiation while making groundbreaking measurements of fundamental properties of the sun’s electric and magnetic fields, solar wind plasma, and energetic proton and electron production.

He has been with the Johns Hopkins University Applied Physics Laboratory for more than 30 years, where he developed radiation models and worked systems mitigations for radiation effects in microelectronics for more than 10 spacecraft and several long-duration balloon flights. After serving as system assurance manager for the New Horizons mission to Pluto, he now focuses on developing concepts for an interstellar probe mission and completing the Parker Solar Probe primary mission.

“I am glad we have the opportunity to continue the Wallace Herbert Memorial Astronomy lectures, particularly in our new Integrated Engineering and Science Building,” Dr. Lee Sawyer, Director of Chemistry and Physics and Professor of Physics at Louisiana Tech University, said. “I would like to thank the Herbert family for their support and my good friend Jim Kinnison for agreeing to come down and speak. This is a talk that will introduce the public to the excellent science that NASA and its university partners continue to do using sophisticated unmanned missions like the Parker Solar Probe and the Pluto New Horizons. Many people will be amazed by some of the missions Dr. Kinnison is working on for the future.”

The Wallace Herbert Memorial Astronomy Lecture is free and open to the public. A reception will be held at 6 p.m., followed by the lecture.