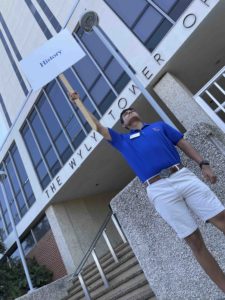 “There’s always a struggle being a minority because it is hard to fit in in certain groups, but I feel no different as a student here at Tech.”

Louisiana Tech University is home for Gabriel Freeman, a sophomore History major who has found his place through his commitment to making the University a better place for all students.

Freeman was born in Oregon and is originally from the west coast, but he considers Louisiana his home. Benton is his hometown.

“I’ve lived in many states, but Louisiana is where I’d say I’m from,” he said.

He is involved in organizations all over campus. He is a sophomore senator in the Student Government Association (SGA), Phi Delta Theta fraternity brother as well as chaplain and social chairman, member of Peer Leadership Council, member of the BCM student leadership team, a student recruiter, a cadet in the AFROTC, and a mentor in the Bridge to Bulldogs program.

“I believe that God gave me a purpose to serve,” Freeman said. “I’ve always had a hard-working spirit and wanted to help as many people as possible. Tech gave me opportunities. I took them and continue to get more involved to this day. I am a firm believer in what you put in, you will get back.” 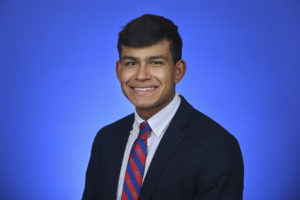 Freeman is one of the few Mexican-Americans on Tech’s campus.

“There’s always a struggle being a minority because it is hard to fit in in certain groups, but I feel no different as a student here at Tech,” Freeman said. “I feel just as equal and given the same opportunities as everyone else.”

Tech was always Freeman’s No. 1 choice for college. He fell in love with the campus while attending a JROTC drill competition.

In his junior year of high school, Freeman decided that he wanted to become an officer in the Air Force. He could have attended the Air Force Academy, but he wanted the full college experience.

“I have no regrets at all for coming here and consider Louisiana Tech my second home,” Freeman said.

Along with wanting to become an officer in the Air Force, Freeman’s overall dream job is to become the first Mexican-American President of the United States. 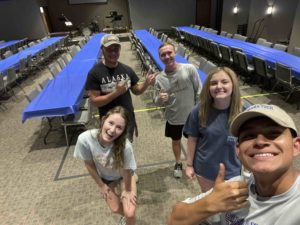 Freeman’s election as the first Mexican American president would be a major game changer for America and the advancements of racial equality as we know it. With the track that he is on right now, there is no doubt that Gabriel Freeman is a force to be reckoned with.

Tech has become a place for Freeman to be the best version of himself. With all the relationships he has created and his involvement on campus, he serves as an example for those those younger than him. He hopes they can be inspired to chase their own dreams one day.

This story was written by Communication student Leslee Bennett.