Flight Team soars to Nationals after qualifying at Regionals

Louisiana Tech’s Precision Flight Team, a student organization that competes in National Intercollegiate Flying Association (NIFA) events, participated in its regional event in late October and performed well enough to qualify for the national competition at Ohio State University in May 2022. 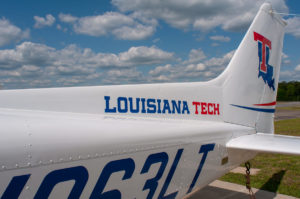 The date is undetermined at this time; last year, the competition was not held.

The team either won or placed in the top three spots in several individual events and finished second and third in team events at the Regional held at Delta State in Cleveland, Mississippi.

“The Flight Team’s accomplishments are a result of student initiative and performance,” said Jon Pearson, an Assistant Professor in Tech’s Department of Aviation. “Students sign up, schedule, coordinate, and practice for competition. Credit for their performance belongs to them. As faculty advisor, I merely communicate with NIFA and the other schools.”

There are 22 members on the team. Because of limitations on how many can compete and expenses, 12 students made the trip to Regionals.

NIFA’s motto is “Safety through Education, Excellence through Competition.” The organization breaks its annual events into Safety and Flight Evaluation Conference (SAFECON) Regionals and the SAFECON National Championship. Louisiana Tech is part of Region IV, which consists of flight departments, colleges, and universities in Texas, Oklahoma, Arkansas, Louisiana, and Mississippi.

At the regionals and nationals, students compete individually or in pairs, depending on the event. There are ground and flight events.

Tech students and the team placed within the top three in the following competitions: 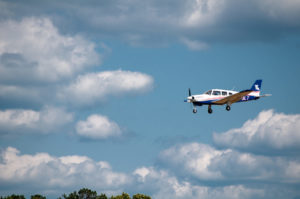 The leaders of the team and those most responsible for coordinating practices, travel, and communication are President Russell Lewis, Vice President Laura Daniel, and Treasurer Caitlin Crews.

“The flight team is full of highly motivated students who want to do more than just go through the motions of flying and going to class,” said Lewis, a senior from Cincinnati, Ohio, majoring in Professional Aviation. “We go out of our way to make time to practice both flying events and to take practice tests in preparation for competition. Most other schools’ flight teams have designated coaches and classes where they are trained for competition, whereas we do not.”

Because of that, seniors like Lewis and Daniel, who is from Paris, Texas, and also a Professional Aviation major, are tasked with the responsibility of filling what would traditionally be the role of a coach for the newer members.

“This leads to a sort of familial culture,” Daniel said, “where it’s our job to make sure the younger members of the team fit in and have a good time.”

That attitude paid off in Mississippi in October.

The goals of the team include qualifying for national competitions, attending local fly-ins, and promoting safety and camaraderie within Tech’s Department of Aviation. The team is a year-round commitment, and during competition season, there’s an event almost every day.

“We try to have at least one event every two weeks in our ‘off season,’ whether it’s a plane wash or a practice,” Daniel said. “We have one quarterly business meeting where we try to establish a roster and brief all members on upcoming events and competitions. This also usually coincides with an interest meeting when we have them. If one wanted to join the team, we are a no-cut team as of right now and anyone who is a Professional Aviation major can join.”

The best way to join is either to attend an interest meeting or to contact a member.

Junior Professional Aviation major Cody Coker of Calhoun finished first in Aircraft Preflight Inspection. The NIFA bugged a Cessna 150 with 40 discrepancies that would cause the plane to be not airworthy, then gave each contestant a maximum time of 15 minutes to find as many discrepancies as possible.

“I was able to find 38 of 40 in eight minutes and 10 seconds, which was extremely impressive and fast to the judges,” Coker said.

Ryan Walker of Round Rock, Texas, a senior double-majoring in Physics and Professional Aviation, placed second in Ground Trainer and third in Computer Accuracy. Ground Trainer is a solo event that takes place in an analog Cessna 172 Skyhawk simulator, or aviation training device, on the ground. Each contestant must fly a predetermined profile, made up of straight and level flight, climbs, turns, and descents, that lasts about 5-10 minutes. Computerized scoring grades each contestant based on deviation from desired parameters such as altitude, airspeed, and heading.

“The skills required for this event are exactly the same as those required for all Tech pilots during the beginning of instrument training, and I owe my performance to the training I received at Tech,” Walker said. “The computer accuracy event is a 60-minute written test that consists of 40 multiple-choice questions that require an E6B or similar manual flight computer for solving; an E6B is essentially a slide-rule calculator specialized for aviation problems.”

Senior Zachary Hanks and junior Holden Martin, both Professional Aviation majors from Lafayette, won the Aircraft Aviation event. Walker and Bossier City senior and Professional Aviation major Caitlin Crews finished third. The event judges how accurately teams can plan and execute a flight. Teams are assigned a specific altitude, airspeed, and a route made up of five waypoints.

Using the 30 minutes allotted, Martin did the calculations using the performance charts for the airplane and the current weather forecast. Hanks was then “tasked with actually flying the airplane precisely on the route that Holden had mapped out for me,” Hanks said, “and with making sure that we flew over each waypoint at the time that he had calculated.”

“Using our skill and a bit of luck, we crossed the final waypoint at the exact second I planned — 53 minutes and two seconds,” Martin said. “We then headed back to the airport and landed, where our actual fuel burn was just half a gallon off to what I had planned for it to be.”

“Overall, I think we did great,” Crews said. “We learned that precise refueling is important in the navigation event. We will practice refueling for Nationals, which will result in the actual fuel burn being closer to the planned fuel burn.

“This was my first time competing in a NIFA competition, and I look forward to competing at Nationals in the Spring. I’m incredibly proud of everyone on our team and all the hard work that went into preparing for Regionals.”

Cade DeLoach and Daniel Asdel won the message drop event, in which one student pilots the aircraft, holding it at altitude and adjusting course, while the right seat gives directions to the pilot to adjust course for the effect of wind on the message container and releases the message toward the target at the appropriate time.