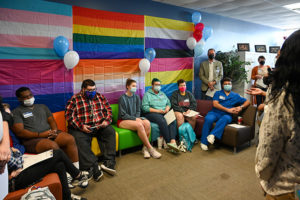 With wardrobe closet space for the TAC’s quarterly clothing swap, learning areas for students, and a rainbow couch, this space will be a place LGBTQ+ students and their allies can use for meetings, movie nights, and study sessions.

“This center is a symbol of love,” student Charity Scott said. “I love the idea of everyone coming in here and accepting everyone as they are.”

This idea of acceptance was the foundation of students’ dreams when they first approached Tech President Dr. Les Guice about the Center. 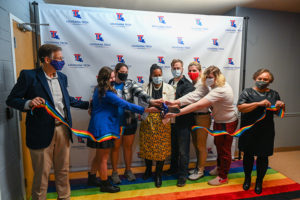 “There was a need for a space where there would be a sense of belonging, of ownership, and of investment,” Dean Devonia Love-Vaughn said. “The LGBTQ+ Resource Center was created because each of you matter; your voices matter.”

While the Resource Center is a great gain for the Louisiana Tech LGBTQ+ community, there is still need for more growth, expansion, and competence in all areas of diversity.

“Multiculturalism isn’t an end goal. We should never stop learning competence and growing in it,” student David Rusk said.

“That’s the great thing about visions,” Love-Vaughn said. “They expand, they grow, and they develop.”