Louisiana Tech University Physics senior Thomas Goldston of Longview, Texas, has learned two things from his professors at the University: that it offers a Medical Physics emphasis option within the Physics program and that he wants to become a clinical medical physicist.

For Goldston, learning that his love of physics can help him help people address their medical problems was almost as happy an epiphany as realizing that he wanted to study physics in the first place. 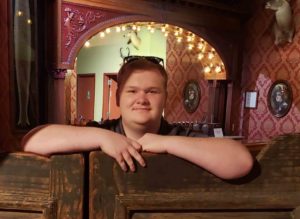 As a math-loving high school student, Goldston had planned on becoming an engineer, but after taking an AP physics course that was his favorite throughout high school, he changed his plans, applied to Tech, and eventually took Dr. Neven Simicevic’s (assistant director and professor of physics) Intro to Medical Physics class.

“I didn’t know what I wanted to do with physics until I took Dr. Simicevic’s class,” Goldston said. “It was insanely interesting. As a bonus, medical physics seemed like a very practical career path.”

As part of the class, Goldston and his classmates learned about the two tracks of medical physics: using physics to create therapies, such as ionizing radiation to reduce tumors or destroy nerve growth, and using the science to improve imaging to better diagnose diseases. They also got to take a tour of the Willis-Knighton Cancer facility in Shreveport, where they got to witness some of the medical professionals use physics to test machines and safety.

Simicevic says that Goldston is the most dedicated student that he’s had in the course so far.

“In my 25 years of teaching at Tech, I have never seen anybody so passionate in a field, and in the case of Thomas, the field of medical physics,” Simicevic said. “During the class he went from someone who did not know what medical physics is to someone who decided to pursue, by his words, ‘the most incredible academic field I have ever explored’. After the class he planned his entire life around medical physics, his internship, his part time work, his senior thesis, talking to people in the field, and finally, looking for graduate school in medical physics. I try to convey his attitude to other students.”

Thanks, in part, to connections he made here at Tech, Goldston has served as an intern with the KLS Physics Group, a local medical physics company, for nearly a year. After being recruited by Thomas Larry, who is a diagnostic medical physicist partner with the company, the 2003 Louisiana Tech Physics alumnus, the 2015 College of Engineering and Science Distinguished Alumnus for the Physics program, and a member of the Physics program board of advisors, Goldston joined the team in July of 2021.

“I really enjoy interning at KLS,” he said. “I have the opportunity to shadow medical physicists as they do quality control checks on nuclear medicine, CTs, magnetic resonance imaging (MRI), and other imaging machines to make sure everything’s working. I’m specifically working on reviewing lead shielding and calculating ionizing radiation to determine how much lead needs to line walls to reduce exposure levels outside of the room to safe limits. I enjoy talking about some of these projects with my physics professors to learn about how academia approaches similar problems and getting their advice.”

Goldston has been accepted to the University of Texas Health Science Center at San Antonio, where he will earn a doctorate of medical physics and become board certified. He plans to build his career around the field, joining a large hospital or a medical physics company like KLS Physics Group full time, where he will work in clinics as well as conducting research of new imaging technology.

What advice does he have for students interested in the medical physics emphasis?

“Louisiana Tech Physics professors of all specialties have a lot of valuable knowledge. Talk to them about projects, and ask them about getting more medical physics classes or advice on resources. Take an anatomy class, or a modern physics class, or a class in quantum physics. Join an organization like the American Association of Physicists in Medicine, or read the publications of the National Council of Radiation Protection or the American College of Radiology.”

Students who enroll in the Physics program and choose the Medical Physics emphasis work on a medical physics-related research project as part of the curriculum, collaborating with professionals at the Willis-Knighton Cancer Center. Other research options provide students with opportunities to participate in internationally-recognized research projects in biophysics, biostatistics, radiation physics, and nuclear physics.

For more information on the emphasis option in Medical Physics, contact Simicevic.