This June, Louisiana Tech University writer and editor Teddy Allen will be inducted into the Louisiana Sports Hall of Fame for his work as a sports journalist and broadcaster.

“It’s an unexpected honor to be included with so many people I’ve admired for a long time and many I’ve gotten to know and grown to love,” Allen said. “Extra special since in high school I was voted ‘Most Likely To Dangle A Participle.’” 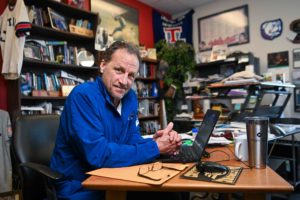 Allen graduated from Louisiana Tech with bachelor’s degree in journalism and master’s degree in English. Today, he is still connected to his alma mater as the University’s senior writer in the Office of University Communications and as a broadcaster for Tech football.

“Teddy is truly deserving of this honor,” said Tonya Oaks Smith, Executive Director of University Communications for Tech. “If you’re talking about Louisiana Tech and sports – no matter where you are in this state – people will inevitably ask about Teddy Allen.”

Aside from his work at Tech, Allen has also written three books, served on the committee for the Sports Hall of Fame for more than 20 years, and worked as a columnist for the Shreveport Journal, Shreveport Times, and Times-Picayune.

“Teddy’s selection was inevitable,” Doug Ireland, chairman of Louisiana Sports Hall of Fame, said. “He is one of Louisiana’s greatest journalism talents of all time. He has informed, entertained, and captivated thousands of people through his writing and has been a great encouragement and friend to those of us who are lucky enough to know him.”

Throughout his career, Allen has received awards including the Associated Press Sports Editors National Feature Writing Award, Louisiana Sports Writers Association’s Story of the Year, and the Ernie Pyle Award.

“I’m grateful for so many who trusted me and, without having a real good reason to, just gave me a chance to do this,” Allen said. “And there’s a deep appreciation for all the people I’ve worked with; this was always a team game.”

Teddy Allen is known in his field for being a “team player” who is always working to bring everyone together.

“Teddy’s a glue guy,” Ireland said. “He bonds together people of different backgrounds and makes everyone feel valued. He’s also a knucklehead; there’s not a pretentious bone in his body.”

While Teddy has served on the selection committee for the Louisiana Sports Hall of Fame, he has also used his comedy skills for almost 15 years as the master of ceremonies for the induction.

“He has had Payton Manning and Shaquille O’Neal rolling,” Ireland said. “But his impact stretches far beyond those few hours on a Saturday Night in June. He helped refine the operations and mission for both the Louisiana Sports Hall of Fame and the Louisiana Sports Writers Association.”

“I am honored and privileged to just get to do this work,” Allen said, “to be around the arena and with people who care about what they’re doing and how they do it.”

The 2022 Induction Celebration will be held in Natchitoches June 23-25. Order tickets online at lasportshall.com/gettickets.

This story was written by Marketing student Sophie Edwards.

See Tech's Ties to the LSHOF