After nearly 40 years teaching Louisiana Tech students how to address electrical engineering problems, Dr. Mickey Cox has retired from the University. In honor of his devotion to Louisiana Tech and the College of Engineering and Science (COES), College Dean Dr. Hisham Hegab, in conjunction with University Advancement, has created a giving opportunity in Cox’s name. 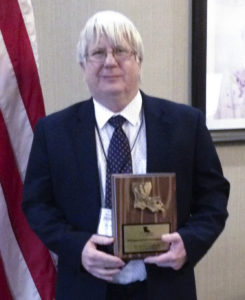 Over his 39 years of service, Cox used humor, relatability, and colloquialisms to prepare generations of students for the rigors of electrical engineering careers, teaching nearly 300 lecture courses and more than 100 labs and guiding numerous special projects, including the investigation of capacitors generating acoustic noise at a power substation, the conversion of a Ford Mustang powered by an electric motor rather than a conventional gasoline engine, and the study of radiation from distribution lines carrying broadband-over-powerline signals.

Cox, a Louisiana Tech alumnus who earned his BS and MS in Electrical Engineering from the University, chose to spend his career teaching burgeoning Bulldog engineers as a way to pay forward the sense of accomplishment and belonging he felt as a student.

“I enjoyed the atmosphere at Tech as an undergraduate student and decided that it would be nice to teach at Tech as a career,” he said. “I particularly enjoyed teaching a wide variety of Electrical Engineering (EE) courses over the years, from courses designed for sophomores to those for graduate students. My favorite class to teach was probably Electrical Engineering 411, the second electromagnetic fields course that all EE seniors must take. (I often told the students that electromagnetic field theory is the basic foundation of electrical engineering.)”

For students like Austin Taylor (BS ‘17, MS ‘19), Cox succeeded in combining a sense of community and expertise in his students. Taylor enjoyed his undergraduate classes with Cox so much that he joined Cox’s Power Lab research group in graduate school. He says that Cox’s teaching style influenced how he approaches the electrical engineering classes that he teaches as a doctoral student at Auburn University.

“The first day of one of the classes, he walked around with a camera and took a picture of everyone. Then, he printed off the pictures and had us write a fun fact about ourselves just so he could get to know each of us individually. As a graduate student, he advised me on my master’s thesis, and we got a research opportunity from Entergy to continue the work. As much as I enjoyed his classes, I’m proud of the research we did together.”

Toby Russell (BS ‘20, MS ‘21) added that he loved taking Cox’s classes both to learn and to interact with Cox.

“Dr. Cox had a major impact on me during my time at Louisiana Tech. I took several of my upper-level Electrical Engineering courses with him, and I loved them all. The man has a truly impressive wealth of knowledge. Over the years he attempted to teach me more about electrical engineering than I could ever possibly remember. As an instructor, he made a point to help students in need, but he also was careful not to ‘give away the store’ and ensured students would need to think for themselves to get high marks on tests or ‘special assignments.’ I feel like every time I met alumni around Nethken, they were either on the way to or leaving Dr. Cox’s office. He had a profound positive impact on a lot of people.”

While he will miss interacting with Tech students on a daily basis, Cox plans to spend his retirement traveling with his wife and Senior Lecturer of Chemistry at Tech Dr. Marilyn Cox, once she retires. In the meantime, he’s having fun trying to learn how to play his new banjo.

In addition to teaching, Cox has published dozens of articles and won numerous awards for his work in power systems communications, electromagnetic fields, and power quality.

To learn how you can make a donation to the College of Engineering and Science in his honor, contact Devin Ferguson, Executive Director of Development, at devin@latechalumni.org or 318. 497.7737.