It’s not the Super Bowl or the World Series or the Olympics. But the 2010 soccer World Cup is bringing Louisiana Tech students from across the globe together to watch the games in the International Student Office.
Engrossed in the Slovakia vs. Italy match Thursday morning, Rashed Al Marri, a freshman mechanical engineering major from Saudi Arabia, was focused on the game, one in which his favorite teams aren’t even competing.
“I was cheering for Germany, and now I’m just (torn) between Germany and Brazil,” Al Marri said, his eyes on the TV in the ISO. “I cheered for the U.S. on Wednesday. I was very happy when we scored at the last minute.” 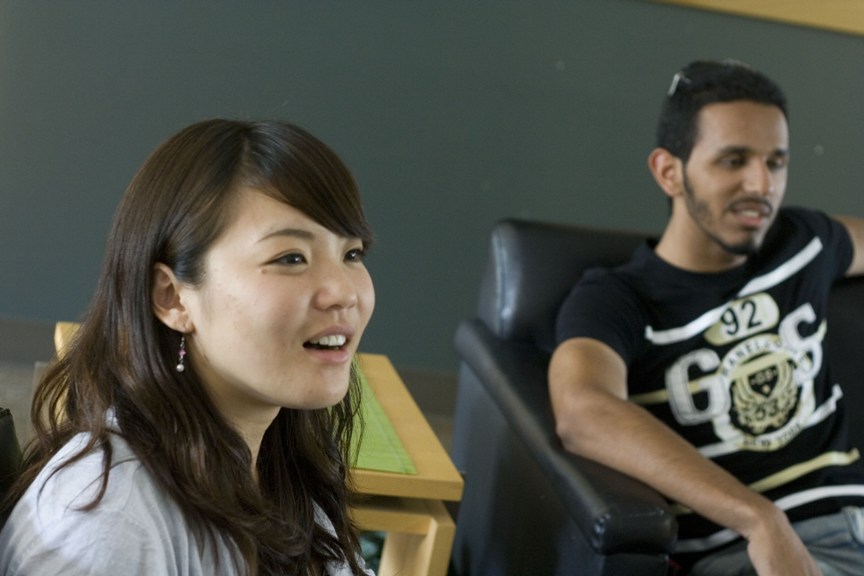 Hiromi Otera, of Japan, and Rashed Al Marri, of Saudi Arabia, watch the Japan-Denmark match in the International Student Office at Louisiana Tech

When Japan played Denmark Thursday afternoon, Hiromi Otera, a freshman nutrition and dietetics major from Japan, met some friends in the ISO to watch the game, even though she is a new soccer fan. She and several other international students cheered and gasped as Japan scored their three goals during the game.
“I just started watching it this year,” Otera said. “Soccer is big in Japan. If I went back to Japan now, every TV program would be on soccer. It’s the biggest sport in Japan.”
Titly Dhar, a senior industrial engineering major from Bangladesh, said a crowd of about 30 people filled the ISO when the U.S. team played and won against Algeria on Wednesday.
“When U.S. scored, they went wild,” Dhar said. “We’re over here, so it’s like a default team. The all-time favorites are Argentina and Brazil, and we cheer for them.  If Argentina is playing the U.S., it’d be a big fight.”
Dhar said that fútbol in Bangladesh was similar to football in America.
“It’s a big thing back home,” she said. “We have our teams to cheer for. Here you’d play baseball or football, but there, you play fútbol.”
Kevin Sherry, head coach of Louisiana Tech’s soccer team, said that interest in soccer has been growing over the last few years. Tech’s team has 29 players. A Japanese player just graduated, and the team has one Canadian and one girl from England who is coming in 2011.
“The East and West coasts are more culturally diverse, so soccer has more influence over there,” Sherry said. “It’ll be interesting to see what impact the World Cup will have on this region and in Ruston in particular. We’re offering free soccer camps and coach training and trying hard to get people interested. We need interest from parents and kids to match that, and you’ll see a dramatic growth.”
Dan Erickson, director of the International Student Office, said now that the first week of the World Cup is over, the students are a little pickier about the games they come to watch.
“The first week everyone was here for every match,” he said. “Now they’re starting to choose which matches they come to.”
Aadel Darrat, a master’s business administration student from Ruston, said it doesn’t matter who’s playing – he just wants to watch a good game.
“I come over here between classes. It’s easier than going home,” he said. “I was cheering for France, but now that they’re out, I’m hoping the U.S. does really well.”