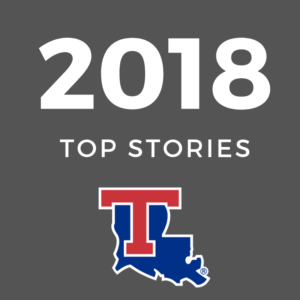 In 2018, Louisiana Tech University students, faculty, and staff have broken records and met challenges head on. We’ve listed here just. few of Louisiana Tech’s top stories for this past year.

From great value for students to recognition for individual programs, Louisiana Tech University earned spots on many rankings lists last year. For a run down, review our news posts online.

There was no better way to celebrate Arbor Day at Louisiana Tech University than by fully funding the Noble Trees crowdfunding project, thanks to a group of generous donors committed to the beauty of the campus.

Record number graduate in May 2018

Louisiana Tech University graduated its largest class in University history during two commencement ceremonies in May 2018. A total of 1,061 graduates walked across the stage at the Thomas Assembly Center – 909 undergraduates received associate’s and bachelor’s degrees and 152 earned master’s and doctoral degrees.

Louisiana Tech University enrolled a record number of first-time freshmen this fall quarter, and these students are the most qualified in the University’s history. With an increase of 13 percent over last year’s freshman class, Louisiana Tech welcomed 2,169 first-year students. Their average ACT is 25, eclipsing last year’s all-time-high average ACT of 24.7.

Mason Andrews, an aviation student at Tech, completed his mission to be the youngest human to fly solo around the world. He completed the trip in 75 days and returned to Louisiana Tech to continue working on his academic dreams.

On Nov. 10, Louisiana Tech University launched its boldest fundraising initiative in history – Forever Loyal. A $125 million goal was announced for the campaign that coincides with the University’s 125th anniversary.

With the authorization from the Southern Association of Colleges and Schools, Louisiana Tech’s regional accrediting body, the University is able to expand its offerings so that students will have the opportunity to complete their four-year degrees at the ASC.

Louisiana Tech defeated Hawaii 31-14 in the SoFi Hawaii Bowl. Ferguson, who was named MVP of the game, ended his decorated collegiate career with 45 sacks, one more than Suggs, and coincidentally his jersey number.

Every day, Louisiana Tech students, faculty, and alumni make a difference in their communities. To learn more about our Tech Family, visit the University’s news site.