A tenet is an opinion, doctrine, or principle held as being true by a person or especially by an organization.

A college or university is often defined by the traditions, values, and principles established by its leaders over the course of many years, and how effective those leaders were in infusing these concepts into the culture of the institution. Over time, these concepts become the cornerstone of the institution’s identity and the pillars upon which its mission and vision is built. They should also comprise a large part of the students’ personal character as well as serve as a guideline for future generations.

The Division of Student Affairs at Louisiana Tech University has developed 12 guiding principles, or tenets, that exemplify the qualities that Tech students should possess upon graduating from this institution. It is expected that students will conduct themselves according to these tenets during their academic careers at Tech and, after graduating, continue to personify these tenets in their personal and professional lives.

In essence, these tenets become more than ideas to be learned; they become a moral and an ethical compass with which to navigate through life.

Nothing less will do for members of the Tech Family.

The Tenets of Tech are:

O Tech, thy halls so beautiful,
Thy pleasant walks, thy noble trees,
That charmed me in my college days,
Are ever dear to me.

Those old Tech days, those joyful days,
So cherished in my memory,
Though days of toil, in many ways
Were happy days and free.

Get on your toes when you meet your foes,
And don’t let them break through!

Hit those lines like good ole canines!
Break through for a touchdown or two!

Hold up your chin and let’s all go in
To win for the red and blue!

Lady of the Mist

One of the most beloved landmarks of the Louisiana Tech Campus is the Lady of the Mist, a sculpture in the midst of a fountain in the quadrangle.

In 1938, the Lady was funded by the campus’s young Panhellenic System – the sororities on campus. The sculpture was strategically placed to welcome all to the campus as through the columns that stand north of Prescott Memorial Library, which served as Tech’s main entrance.

The statue was the brainchild of two distinguished faculty members of Louisiana Tech – Mary Moffett and Elizabeth Bethea. The inscription on the Lady states that she symbolizes “Alma Mater,” welcoming new students and bidding farewell to graduates. She symbolizes a hope that Tech graduates will fulfill their ambitions and their highest callings.

Legend of the Bulldog

The legend of the Louisiana Tech Bulldog dates back to fall 1899. The story involves five Tech students on their way home from class. When they reached the edge of campus, they noticed a quiet old bulldog sitting alone under a tree. Assuming the dog was a stray, they fed him all the food they had with them and continued on their way.

When the young men had reached the boarding house where they were living, one of them discovered that the bulldog had followed them. They all liked the bulldog and decided not to send him away. They received permission from the owner of the house to keep the dog and to let him sleep in the kitchen for the night. However, they would have to make other plans the next day.

During the night, a fire broke out in the house and the bulldog was the first to be awakened. The old dog became alarmed and ran from room to room tugging at the sheets of the bed to wake the students and the owner. Once the owner and the students had assembled outside, they were horrified to discover that one boy was still in the house. By this time, the house was almost completely full of smoke. Before the boys had time to react, they saw the bulldog run back into the burning house. Moments later, the final student ran out to safety. They all waited for the bulldog to come back out, but it never did.

By dawn the fire was out and the boys searched what remained of the house in hopes of finding the old bulldog alive. After a short time, they found the old dog lying in an unburned corner of the house. The smoke and heat had been too much, and the heroic dog just did not make it.

With tears in their eyes, the young men picked up the lifeless body, and without saying a word, began to walk back to the campus. When they reached the tree where they had met the bulldog only the day before, they began to dig a grave. Not wanting the bulldog to lie uncovered, two of the students took off their jackets and wrapped the bulldog. One jacket was red, the other blue.

Soon, the news of the stray old bulldog spread across the Tech campus. Everyone grieved and felt a closeness to the bulldog that most of them never knew. A loving old bulldog had become the first Tech hero.

A year after the death of the bulldog, Tech began making plans to start its first football team and needed a mascot and school colors. The students voted unanimously to become the Bulldogs in honor of Tech’s first hero. The school colors were chosen to be red and blue in recognition of the colors the bulldog was buried in.

Today, no one is sure where the old bulldog is buried or of the names of the young men who saved it. However, one thing is certain. The spirit of the dog is still very much alive, and the love and loyalty it displayed has been a trademark of Tech people for many generations. Questions about the events long ago will always exist, but be assured that somewhere on the Tech campus are the remains of a brave old bulldog wrapped in red and blue. 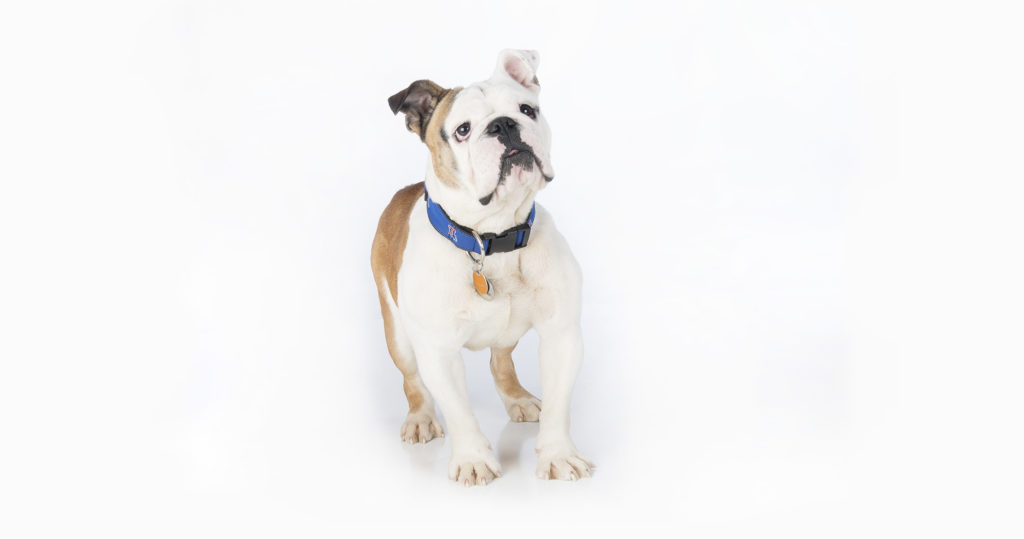