Quality of the underground utility infrastructure is directly related to the economic potential of our society. Poor information on existing structures contributes substantially to the overall cost of their management and repair. Overall information on underground conditions may be obtained from accurate underground detection. Underground objects can be detected by intrusive and non-intrusive techniques. Intrusive techniques have broad and highly developed applications in certain areas, like investigations for tunnels, environmental contaminated sites, in an offshore oil and gas industry, but are not very practical in urban areas. In the noisy and complex underground environment beneath urban streets, non-intrusive techniques that provide sufficient resolution to resolve small underground objects for characterizing the shallow urban underground should be applied. The researchers at the TTC have successfully developed various systems in the area of underground detection, including an electromagnetic ultra-wideband system for pipe inspection, a system for damage prevention during excavation, a fast trigger for discriminating the Ground-Penetrating Radar position above or under the ground position, and a system for fast determination of dielectric properties of soil as a function depth. Several US patents were developed as a result of this work. 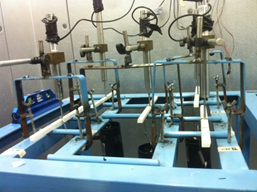 Collection of data for long-term tests is often challenging. Unnoticed change in the ambient condition can lead to erroneous data. Therefore, automation in data collection system was deployed for long-term creep tests performed in TTC during the recent years. The outcome was found impressive.

Pipe rehabilitation and trenchless pipe replacement technologies have seen a steadily increasing use over the past 30 to 40 years and represent an increasing proportion of the approximately $25 billion annual expenditure on operations and maintenance of the nation’s water and wastewater infrastructure. Despite the massive public investment represented by the use of these technologies, there has been little formal and quantitative evaluation of whether they are performing as expected and whether rehabilitation is indeed cost-effective compared to replacement. The biggest data gap in asset management for pipeline systems involving rehabilitation is the prediction of the remaining asset life for the existing pipe and how long rehabilitation techniques can extend that life. Municipalities have expressed a strong desire for some hard data on the current condition of previously installed systems to validate or correct the assumptions made at the time of rehabilitation. Since several of the major pipe lining techniques have now been in use for at least 15 years (some nearly 30 years in the U.S. and 40 years internationally), it is a good time to undertake such an investigation to assess whether the originally planned lifetime (typically assumed to be 50 years) is reasonable based on the current condition of the liner. The objective of this study was to create a national database of performance results for technologies used in the rehabilitation of gravity sewers, together with the means for interpreting the results through data mining techniques. Specimens from multiple lining techniques were collected from twenty-seven (27) in-service sites and were subjected to a battery of physical tests, capturing quantitative experimental data as well as broader qualitative data from the agencies that participated in the study. The test results and supporting information were exported into a custom-developed web-tool which enables the user to explore and interrogate the data using a series of statistical tools which were built into the software. Information provided include trends over time of key mechanical properties as well as establishing relationships among various properties, in an attempt to identify indicator(s) of degradation of the liner system and the rate of such degradation mechanisms over time. The paper describes the samples’ exhuming and testing program, web-based tool and present key results from the data analysis. Developed as a ‘live’ tool, the software is capable of re-generating the statistical analyses as new test data become available.

Air leakage in a forced air duct system is acknowledged to be a major source of energy losses in both residential dwellings and commercial establishments. A recent study reported heating and cooling systems to use nearly 60% of the total energy consumed in a residential dwelling. In North America, each year more than $5 billion worth of electrical energy is lost due to leaky ductwork. This paper presents an innovative lining technology developed using ultra-thin liner material impregnated with Class I fire retardant resin to restore the airtightness of aged HVAC duct systems. Re-thinking every aspect of a generation old lining technology Cured-in-Place Pipe (CIPP) used for rehabilitation of buried pipelines, this innovative HVAC lining system utilizes a newly designed liner, an efficient wet-out system, and an innovative installation procedure to yield substantial cost savings in terms of materials and labor. The technology enables the liner to engage multiple 90° bends in circular and rectangular duct geometries with the formation of minimum wrinkles, although sealing the gaps and openings up to 8 in. (203.2 mm) in diameter, while adding minimal weight to the existing duct system. Full–scale demonstration in two residential homes in Ruston, Louisiana was performed successfully. Standard duct-blaster tests revealed as much as a 90% reduction in energy losses through the duct system. 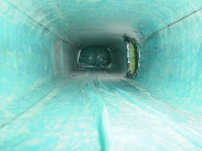 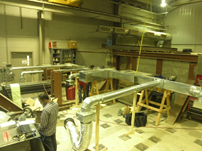 Hydrostatic or Pressure Design Capacity for Liners is based on Short term hydraulic pressure test performed on the liners. TTC had developed a test setup to perform such a test at a reasonable cost. Burst pressures for some of the liners were more than 1000 psi. Testing capacity in TTC at present is up to 24 in. diameter liner with a provision of increasing to 48 in. diameter the near future.

Transportation, handling, storage and welding/butt fusion of individual pipeline segments represents a significant cost in pipe line construction operations. This paper describes an innovative, in-situ pipeline manufacturing technology, where the pipe’s structure consists of a 3-D glass fabric saturated with resin and sandwiched between layers of resin-saturated carbon or glass fabrics. This manufacturing process enables the pipe to be manufactured in a continuous manner at the job site to the desired length and hence was coined ‘InfinitPipe’. Benefits associated with this technology include lower project costs, reduced probability of pipe/coating damage during transportation and handling, enhanced safety, as well as added flexibility in addressing changes that arise in the field ‘on-the-run’.

The Trenchless Technology Center at Louisiana Tech University undertook a battery of controlled laboratory tests to evaluate the mechanical performance of this newly developed pipe technology under external and internal mechanical and hydraulic loads. Tests conducted including ASTM D2412, D2444, D1598, D638, and D790, performed to evaluate the short term behavior of the pipe. The overall response of the pipe-soil system was examined via a full-scale direct buried test, where the pipe’s response was subjected to an equivalent 25 ft of overburden pressure, examining the product’s ability to serve as a stand-alone pipe. Pressure testing was also performed, to evaluate the internal burst pressure of the product as well as its ability to withstand external hydrostatic pressure (‘buckling resistance’). Finally, numerical simulation was undertaken to predict the structural response of the pipe under various load conditions. The pipe product was found to perform well under mechanical loading, either monolithically applied or impact load. Observations made during the testing program were incorporated into the pipe’s development process, resulting in continuous improvements towards the high-performance objectives expected of this new class of pipeline technology. The work was performed with financial support through NSF’s SBIR program. 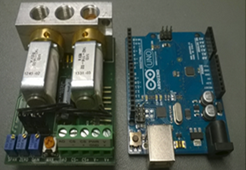 The proposed test aims at testing five (5) specimens of 150 mm diameter ductile-iron pipe specimens, lined with Aqua-Pipe® liner, to evaluate the potential for any leakage at the annular space between the liner and the host-pipe under cyclic pressure conditions. Later, the service connections associated with the lined ductile iron samples were bisected and images, using a camera and a digital microscope were taken to investigate for any trace of a minor leak at those locations. First, the objective of this test series was to visual inspection of annulus leaks at the locations where lateral connections are attached to the liner which are subjected to internal water pressure. Second, the objective was to bisect the service connections and inspect for any minor trace of a water leak at that internal region, by analyzing images taken using a camera and digital microscope.

Research in geopolymers and other cementitious materials has been conducted at the Trenchless Technology Center (TTC) since 2006. Team expertise in this field can be assessed by numerous publications including peer-reviewed journals, articles in Underground Construction, patents, presentations in conferences, etc. The research activities in this area include forensic materials evaluations of chemical grouts, polymers, metals and other materials used in buried infrastructure, characterization and determination of failure modes and damages due to corrosion and weathering. TTC’s laboratory has capabilities to perform optical metallography, scanning electron microscopy (SEM), quantitative microstructural analyses, scale and deposit analyses for corrosion evaluations, chemical composition analyses and alloy verification, and mechanical testing. TTC’s materials science research is supported by a partnership with the Institute for Micromanufacturing (IfM) at Louisiana Tech, which hosts some of the high technology equipment, such as that shown in the table and picture below.